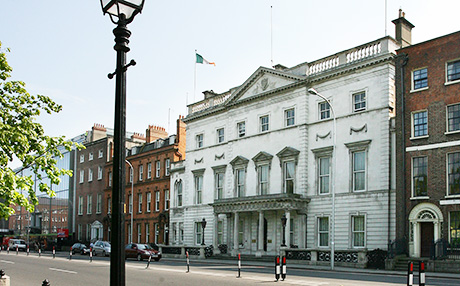 The Tánaiste and Minister for Foreign Affairs and Trade, Eamon Gilmore, T.D., is meeting EU Foreign Ministers in Brussels today to discuss the continuing unrest in Ukraine and the latest developments in Syria.

Speaking in advance of the Foreign Affairs Council meeting, the Tánaiste said:

“I have been following the unfolding events in Ukraine with growing concern. The loss of life is deeply shocking and I am appalled at reports of torture and other severe human rights abuses perpetrated by the security services.

If there is to be any hope of defusing tensions in the short run, the authorities must launch a credible investigation into these tragic deaths and the other abuses, ensuring that those responsible are held fully to account.”

Foreign ministers will also review the latest developments in Syria – including prospects for the resumption of the Geneva talks, the humanitarian situation and the impact of the crisis on the wider region, particularly in Lebanon and Iraq.

“The attack on humanitarian agencies in Homs over this weekend underlines the urgency and importance of ending this horrific conflict. The resumption of the Geneva II talks remains the best means of achieving this outcome.

Ireland is committed to alleviating the suffering of those displaced in Syria and neighbouring countries. Every effort needs to be made to ensure that humanitarian assistance reaches those that need it the most.

Ireland will continue to urge support for a binding humanitarian resolution by the UN Security Council. Moving to secure such a resolution, in itself, may help to compel the Assad regime to improve humanitarian access.”

The current situation in Egypt, Yemen and Tunisia will also be discussed.

Ministers will also be updated on developments in the Central African Republic, including preparations to deploy an EU peace support operation, as agreed by Foreign Ministers at the Council meeting last month.

The Tánaiste and Minister for Foreign Affairs and Trade, Eamon Gilmore, T.D., is meeting EU Foreign Ministers in Brussels today to discuss the continuing unrest in Ukraine and the latest developments in Syria.