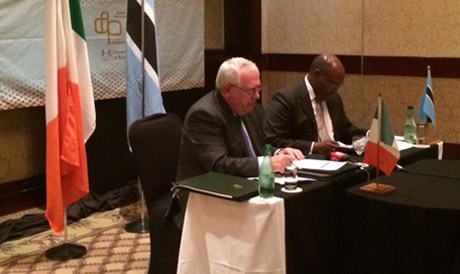 Minister for Trade and Development, Joe Costello TD has signed a Double Taxation Agreement with Botswana to increase two-way trade and investment.

“Double Taxation Agreements are a critical piece of fiscal infrastructure for developing trading and investment opportunities between countries. This agreement will now allow for further trade and investment between Ireland and Botswana, which in 2013 was worth almost €3.5 million.”

The Minister was in Botswana as part of a three-day visit which also includes a trade-focused programme in South Africa.

During his visit, Minister Costello met the Minister of Finance and Development Planning and the Minister for Foreign Affairs of Botswana, and representatives from Irish companies working in South Africa.

Minister Costello’s visit to South Africa builds on the work done during the Trade Mission which he led to the country in November 2013.

Increasing two-way trade and investment with Africa is a key goal of the Department of Foreign Affairs and Trade’s Africa Strategy, which recognises Ireland’s maturing political, trade and economic relations with the continent.

Minister for Trade and Development, Joe Costello TD has signed a Double Taxation Agreement with Botswana to increase two-way trade and investment.