Tánaiste announces grant of €600,000 for GAA facilities in London 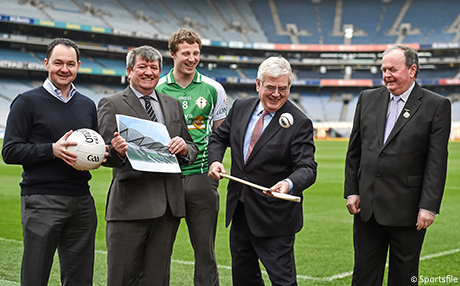 Our contribution towards the redevelopment of Ruislip under the Emigrant Support Programme recognises the GAA’s place at the heart of London’s Irish Community.

The Tánaiste and Minister for Foreign Affairs and Trade, Eamon Gilmore T.D., today announced a grant of €600,000 towards the redevelopment of the Ruislip GAA grounds in London, the headquarters of the London County Board.

The funding is being provided as part of the of the Department of Foreign Affairs and Trade, and represents some 12.5% of the overall cost of the project. The Emigrant Support Programme provides assistance to non-profit organisations and projects to support Irish communities overseas and to facilitate the development of more strategic links between Ireland and the global Irish.

Speaking ahead of the launch of the project at Croke Park today, the Tánaiste said:

“I am delighted to announce a contribution towards the redevelopment of the facilities in Ruislip. This development is timely, coming a year after London did so well in the Connacht Senior Football Championship, and we are delighted to be a part of it. Better playing and spectator facilities will help London build on that success. The development will make it a better place to play Gaelic games and a better place to watch Gaelic games and, as a result, reinforce the GAA’s place at the heart of London’s Irish community”.

The Tánaiste also announced grants totalling €45,000 to support the growth of GAA clubs around the world. These grants recognise the global nature of gaelic games, and the strong linkages which exist between GAA clubs and the Irish communities in which they are based. The grants match equal funding provided by the GAA to these clubs, under the Global Games Development Fund.

“In addition to traditional strongholds, in Britain and the US, this year we are jointly funding projects in areas as diverse as Myanmar, Moscow and Montreal. Where the GAA is active it promotes a strong sense of Irish identity and a strong sense of Irish community. I have seen first-hand how GAA clubs provide a port of call to emigrants arriving in a new location. Even for those who may not have been involved at home, it provides a ready-made community and a chance to meet people. While it reaches into second and third generations of Irish emigrants, there is also a growing number of players who have no family link to Ireland. Many have been introduced to Gaelic games by the excellent Irish teachers and coaches we have working overseas”.

The once off grant for the redevelopment of Ruislip is made from the Emigrant Support Programme, managed by the Department of Foreign Affairs and Trade. It represents a contribution of c.12.5% of the total planned project costs. This contribution will be ring-fenced for the development of the spectator facilities.

Projects under the Global Games Development Fund are funded 50% by the GAA and 50% from the Emigrant Support Programme. The following projects have been funded for 2014:

The Emigrant Support Programme also provides support for the GAA’s community development officers in the US and Britain.

The Department of Foreign Affairs & Trade’s Emigrant Support Programme (ESP), provides funding to non-profit organisations and projects to support Irish communities overseas and to facilitate the development of more strategic links between Ireland and the global Irish.

The emphasis of the Emigrant Support Programme is primarily on supporting frontline welfare services, targeted at the most vulnerable members of our overseas communities.

While the support of frontline welfare services continues to be the priority of the ESP, the programme has also enabled the Government to invest in a range of community and heritage projects, which foster a greater sense of Irish identity, as well as strategic capital projects. These grants are a key part of the Government’s approach to developing strong and meaningful links with Irish communities overseas and to securing the long term future of these communities.

Tánaiste announces grant of €600,000 for GAA facilities in London

Our contribution towards the redevelopment of Ruislip under the Emigrant Support Programme recognises the GAA’s place at the heart of London’s Irish Community.