Ireland in Germany, A Wider and Deeper Footprint 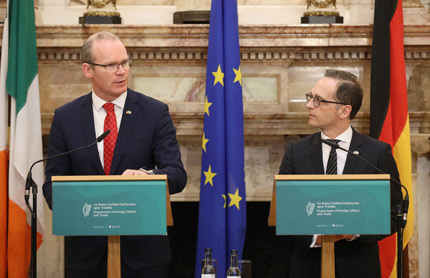 The Tánaiste and Minister for Foreign Affairs and Trade, Simon Coveney TD, has published a comprehensive review of relations between Ireland and Germany, on the occasion of a visit by Germany’s new Federal Foreign Minister, Heiko Maas, to Dublin.

The review – Ireland in Germany: A Wider and Deeper Footprint – makes 23 recommendations including plans to open a new Consulate in 2019 in Frankfurt, the financial capital of the euro zone.

At a press conference, the Tánaiste told his German counterpart that Germany is an indispensable partner for Ireland and said:

“Our relationship with Germany has always been vitally important and never more so than it is today. Germany is a leading destination for Irish goods and services, an important inward investor and a valuable source of tourism for Ireland. But strong though our relationship already is, we should actively look at ways in which we can develop it still further.

“I therefore very much welcome the completion of this Review. Implementation will ensure that our relationship with Germany is further strengthened, enhancing the partnership and friendship we wish to see between our two countries.”

The Tánaiste and the visiting Minister discussed a wide range of international issues, including the Middle East Peace Process and EU relations with Africa. The Tánaiste thanked the Minister for Germany’s support and solidarity on Brexit and both agreed on the need for significant progress in the current negotiations before the European Council in June.

At the meeting it was agreed that formal consultations at State Secretary and Secretary General level would be held on a regular basis – a move which the Tánaiste cast in terms of a wider, ongoing process of strengthening existing alliances in the European Union and building new ones.

Download the Review: Ireland in Germany, A Wider and Deeper Footprint