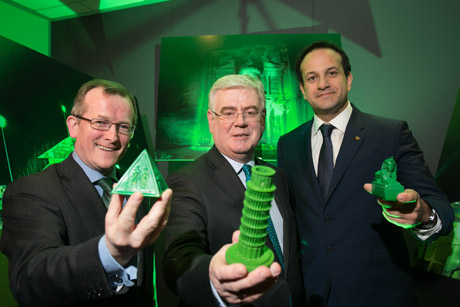 I am delighted to be here to help launch this year’s Global Greening campaign.  Niall and the team at Tourism Ireland, working hand in hand with my Department and its Embassy network in locations around the world, have this year assembled yet another extraordinary collection of iconic sites that will go Green in celebration of St Patrick’s Day.

When you look around at the sites that joined the Greening in previous years, or are going Green for the first time – like the Treasury in the iconic site of Petra – you realise the reach of this campaign.

It is, like all the best ideas, simple, inspiring and infectious.  It is also of course the result of a lot of hard work behind the scenes, and it sets the scene for yet more hard work – translating the attention received by the Global Greening into deeper connections with communities around the world and more visitors making the trip to Ireland.

I would emphasise that these Greenings are about something more than simple publicity.  The Greenings are emblematic of a relationship that we have built as Ireland with our Diaspora communities and, increasingly, with countries around the world that take part in the Global Greening out of a spirit of friendship, respect and partnership.

There is a worldwide community of Irish people that are an endless source of energy and support for the celebration of St Patrick’s Day, and advocacy for Ireland.  But more and more we are seeing national landmarks going Green where that diaspora is there in less force, whether in Jordan, the Czech Republic, Norway, Slovenia or a long list of other countries.

There are parts of the world where, in a very real way, we still need to introduce ourselves as Irish people – to talk directly about what it means to be Irish and what Ireland has to offer the world.  I recently announced the opening of a number of new Embassies and Consulates which will help us do exactly that.  I can’t think of a better way to begin those conversations than through joining together in the Global Greening.

Our Embassy network, supported by Tourism Ireland, Enterprise Ireland, IDA and our other State agencies, organise and support St Patrick’s Day celebrations not just in the US, Britain, Australia or Europe, but in cities like Beijing, Shanghai, Moscow, New Delhi, Lagos and Istanbul.

Britain, the United States and Europe remain our foremost partners and most important markets.  The tremendous performance of our tourism sector last year, driven by The Gathering and by visitors from North America, is a tribute to the strength of those personal relationships, and the impressive work of Tourism Ireland and our industry.

I think everybody recognises that St Patrick’s Day represents an unmissable opportunity to promote Ireland worldwide: tourism to Ireland but also study in Ireland, investment in Ireland, and Irish companies, products, services and food and drink.

The Greening campaign is a wonderful example.  A campaign that costs a tiny fraction of the €10 million it would cost to secure the equivalent impact through advertising.

It was on St Patrick’s Day 2012 that we launched ‘The Gathering’ to our Diaspora.  My Department fully supported that project and our Embassy network undertook over 650 events and engagements worldwide to promote ‘The Gathering’ and Irish tourism in 2013.  We reaped the results last year with 250,000 more visitors coming to our shores. It was yet another great example of a true team effort on behalf of Ireland.

Last year, myself, the Taoiseach and 18 Government Ministers, travelled to 21 countries across North America, Europe, the Middle East and Asia on a ‘Promoting Ireland’ campaign.

As part of those visits, and outside of them, our Embassy network hosted or spoke at over 400 events worldwide attended by hundreds of thousands of people, delivering key promotional and tourism messages which were coordinated across Government and the state agencies.

We promoted trade and investment in Ireland at 101 specific business events, attended by over 8,500 Irish and international company representatives.

We took part in 70 focussed company engagements with potential to support new export opportunities or win new investments.  These included an Invest in Ireland roundtable I chaired in Atlanta with both existing and potential investors.

We had 88 high-level political meetings arranged by the Embassy network.

We promoted trade, tourism and investment with Ireland in op-eds and interviews in the international media – reaching, at a very conservative estimate, over 16.3 million people. When overseas media coverage of events that were part of the high level visits or supported by the Embassy network are added, we reached audiences of at least 76.5 million people.

This is before I mention the platform we get to broadcast the message that Ireland is open for business to audiences at the New York Stock Exchange, the London Stock Exchange, the US Chamber of Commerce headquarters, the world’s largest cash equities market in Paris, the Jeddah Economic Forum in Saudi Arabia, the Frankfurt School of Business and Management, the Chicago Federal Reserve, the Seoul Finance Forum and many others.

And this is before I mention the level of political access that the day affords us from the White House and the United States Congress to every other country we visit.

These are unique opportunities for Ireland, and we are going to continue to ensure that they are embraced to the full.

Ireland is emerging steadily from a period of severe economic difficulty.  This Global Greening and the whole season of St Patrick’s Day are a reminder of what we have going for us.  When I see the connections being made by our Embassies, by Tourism Ireland and by our other agencies, with these partners and markets of the future, I see a real light at the end of the tunnel.  And it’s green!