Statement by Minister Donohoe at EU-League of Arab States meeting 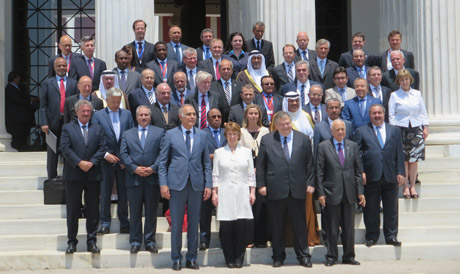 Minister of State for European Affairs, Paschal Donohoe, T.D. at the European Union - League of Arab States Ministerial Meeting in Athens on 11 June 2014

Minister of State for European Affairs, Paschal Donohoe, TD, made the following statement at the European Union - League of Arab States Ministerial Meeting in Athens on 11 June 2014.

Mr. Chairman, Excellencies, Ireland warmly welcomes the holding of this third Ministerial meeting between the European Union and the League of Arab States and commends Deputy Prime Minister Venizelos and the Greek Government for their very effective hosting of the event.

The Arab League represents a vital strategic partner for the EU in a region to which Europe has always attached the utmost importance, not just politically but economically, culturally and in all spheres.

The draft Declaration which we will adopt later today demonstrates the breadth of practical cooperation which now takes place between the EU and the Arab League. Ireland strongly supports this intensification of practical cooperation, particularly in areas such as crisis response, the empowerment of women, electoral observation, legal cooperation, and the promotion of human rights and civil society. Ireland is particularly please to have helped facilitate the inaugural informal dialogue of the EU and League of Arab States' legal advisors, which took place in the Irish Mission to the EU in Brussels last week.

Ireland also supports efforts to institute a more regular strategic dialogue between Europe and the Arab world as this can only assist in addressing the many common challenges we face. Biennial meetings at ministerial level also appears to be the appropriate interval for high-level political exchanges such as this.

Not least among the challenges we collectively face is the continuing horror and tragedy of Syria. It is becoming increasingly hard not to lose hope and despair, in the face of the relentless death and devastation which we daily witness.

Ireland commends the Arab League for the strong leadership role it has consistently played in the efforts to promote a political resolution to this appalling crisis. Our meeting today must reaffirm the need for all violence and bloodshed to end and for all sides to commit to a political resolution rather than taking actions which only prolong the conflict.

Ireland commends Lakhdar Brahimi for all his dedicated efforts as Joint Special Representative. We believe that the principles underlying the Geneva communiqué still remain relevant and offer a template for promoting a genuine political transition within Syria. Actions in conflict with those principles, such as the spectacle of the presidential elections we observed last week, run counter to efforts to end the violence and achieve peace.

It is clear that the political resolution we urgently seek will only come through intensified cooperation between all relevant international and regional players. We continue to look to the UN Security Council to take a decisive lead in this regard, including in addressing the appalling humanitarian situation and in increasing pressure on all parties, but particularly the Syrian regime, to remove the unacceptable impediments to delivery of urgent humanitarian supplies. Resolution 2139 has clearly identified the urgent actions necessary to end such obscenities as besieged communities being starved into submission and we look forward to further measures now being taken by the Security Council to ensure compliance with this Resolution.

We also owe it to the all too many victims of the Syrian conflict and their families to ensure accountability through referral of the situation to the International Criminal Court. It is a matter of great regret that the Security Council last month was unable to endorse such a referral through the exercise of the veto by two Council members.

More efforts are needed to assist and lessen the huge burden which the humanitarian crisis in Syria is imposing on neighbouring countries. Ireland has already contributed some €12 million in humanitarian assistance since the start of 2014 and is actively considering what further assistance it can provide to those countries which have so generously provided refuge to those fleeing the conflict.

Ireland continues to attach the highest priority to the search for peace in the Middle East and the resolution of the Arab-Israeli conflict. We commend the US Administration and Secretary of State Kerry for all their efforts in recent months to promote substantive negotiations between the two sides. It remains clear that that outcome which we all seek, namely a two-State solution, on the basis of the 1967 borders and which addresses all the core issues of the conflict, can only be achieved through negotiations.

Accordingly, promoting a conducive atmosphere in which direct talks can resume and lead to substantive negotiations on all the core issues must remain the priority. Both sides should desist from all actions which undermine confidence and impede the search for peace. In particular, we urge Israel to stop expansion of settlements in the West Bank and East Jerusalem which can only impede the realisation of a viable Palestinian State.

Ireland has welcomed the establishment of the new Palestinian Unity Government headed by Prime Minister Hamdallah as an important step in the effort to end divisions and promote reconciliation among Palestinians. Ireland has always believed that greater unity among Palestinians must be an essential element of overall efforts to promote a just and peaceful resolution of the Arab-Israeli conflict. We attach importance to President Abbas’ assurances that the new Government will remain committed to the principle of the two-State solution based on the 1967 borders, to the recognition of Israel’s legitimate right to exist, to non-violence, and to the respect of previous agreements.

It remains very much in all our collective interests, as Europeans and Arabs, to continue working assiduously for peace on the basis of the Arab Peace Initiative and realisation of the two-State solution. No outcome could be more hugely and positively transformative for the region and our joint neighbourhood.

Our meeting today should also reaffirm the importance of offering all support to those countries within the Middle East region undergoing political and economic transition. In particular, we commend the Government and people of Tunisia on the adoption of their new constitution earlier this year, following an intensive process of internal dialogue, cooperation and compromise. It has demonstrated the urgency of inclusivity and reconciliation for any country undergoing transition and can hopefully serve as a model for the wider region and particularly in Libya which has experienced such a regrettable relapse into violence in recent weeks.

Statement by Minister Donohoe at EU-League of Arab States meeting

Minister of State for European Affairs, Paschal Donohoe, TD, made the following statement at the European Union and League of Arab States Ministerial Meeting in Athens on 11 June 2014.