Address by the Tánaiste to the American Chamber of Commerce 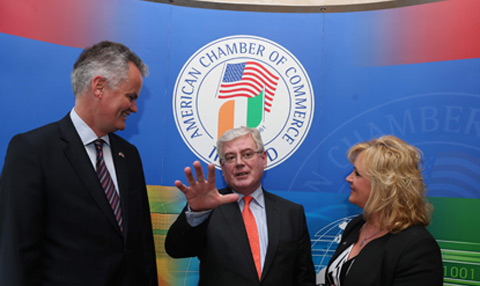 Tánaiste and Minister for Foreign Affairs and Trade, Eamon Gilmore T.D., with Mark Redmond (Chief Executive) and Louise Phelan (President) of the American Chamber of Commerce

It is a real pleasure to join you today and to meet with members of the Chamber and their guests, all of whom contribute greatly to the vibrant economic relationship that exists between Ireland and the United States. That relationship is central to Ireland’s economic wellbeing and today is a good opportunity to celebrate that, and consider how it can be developed further.

The strength of the economic relationship between our two countries mirrors our wider historical, cultural, and political ties. It is built on a solid bedrock of understanding and trust, shared interest and great affinity.

The strength of the economic relationship between our two countries mirrors our wider historical, cultural, and political ties. It is built on a solid bedrock of understanding and trust, shared interest and great affinity. And ours is a relationship that is always evolving - always embracing the most modern aspects of our society as well as the most traditional, and always rich in new opportunity for both sides.

As Minister for Foreign Affairs and Trade I am delighted to be a part of this important relationship. I have visited the US many times since taking office, travelling to Washington and New York as well as to Atlanta and New Orleans. I look forward to returning to New York again in September.

In the meantime I am in regular contact with US friends, and always glad to see them here. I was particularly delighted to meet with the recent high level delegation from Texas, where we will shortly open our newest Consulate General of Ireland.

Last month, I had the pleasure of hosting Congressman John Lewis of Georgia at Iveagh House, where he gave an inspiring lecture on the US civil rights movement and its global legacy.

I was delighted that some of the Chamber members here today were also able to attend the event. In his address, Congressman Lewis recalled the unique relationship between Daniel O’Connell and Frederick Douglass, the US abolitionist who visited Ireland in 1845 and whose work was greatly influenced by his close relationship with Daniel O’Connell.

That evening I welcomed to Iveagh House the great great grand daughters of both Daniel O’Connell and Frederick Douglass, whose families remain in close contact today. We had a fascinating discussion at the event on how the pursuit of equality and social justice in the US and in Ireland has been mutually supportive. Another reminder of the length and depth and variety of this relationship between Ireland and the United States.

Our international relationships matter. And over the past three years or so, we have had to work harder on our external relations to restore Ireland’s reputation following the economic crash.

In that three years we have made significant progress in emerging from the deep economic crisis that we inherited in 2011, and in rebuilding, re-enforcing and renewing our relationships with other countries, and especially with the United States, which as a good friend has always remained fair to us.

We are well advanced in turning this economy around – we have stabilised the banks, restored order to the public finances and have successfully exited the EU/IMF Programme without a precautionary credit line. Having been relegated to junk status as a result of what happened, our sovereign bonds are now back rated as investment grade by all the major ratings agencies and we have seen the full normalisation of Ireland's presence in the capital markets. Today our bond yield is just over 2.6% (2.63%).

We are now making solid progress in our national recovery with increasing signs of a sustainable and broadly-based recovery in the economy and a major improvement in the numbers employed, with 61,000 jobs created last year.

This is starting to translate into reduced unemployment levels with the latest standardised unemployment rate at 11.7 percent – the lowest level for five years, and down from a peak of 15 percent.

While this is heading in the right direction, unemployment is still too high and creating jobs remains our foremost priority. That is why we have designated 2014 as the Year of Jobs and are pursuing a range of strategies across government to create the right environment for job creation.

As part of this we put in place a major stimulus programme in 2012, providing additional capital investment to help support investment in infrastructure and jobs.

Earlier this week we announced the fourth phase of this programme, with a further €200 million to be invested in new projects across a range of sectors, including road schemes and social housing. This is additional to the €3.3 billion capital investment that the Exchequer will be making this year.

One of the major challenges for us is to restore balanced activity across the economy.  As you know, when the property bubble burst here, our construction sector collapsed.  As a consequence, nearly one in five people who are unemployed are ex-construction.

The focus for the future is on finishing the job of economic recovery, of creating jobs and of building a better post crisis Ireland.

While many challenges remain, in 2014 we are overall in a far better and more optimistic place:

I must acknowledge the important contribution made by Foreign Direct Investment to our economy overall, and to job creation in particular. The United States remains our largest source of FDI – 72 percent in 2013 – and again I thank those of you here today who are part of that.

This Government remains committed to that partnership. We are also committed to ensuring that Ireland remains an attractive location for FDI by maintaining our competitiveness, by continuing to invest in research and development as well as maintaining an open, transparent, stable, and competitive corporate tax regime.

At this point I would like to pay a special tribute to Barry O’Leary, the Chief Executive of IDA, who is moving on. I understand that Barry is due to receive an award from the American Chamber of Commerce this afternoon in recognition of the important work he has done in further developing the economic relationship between Ireland and the United States. Your decision to make this award today is well-merited. Barry led the IDA in difficult times, when the needs of the country were great and resources were few and was not found wanting. I want to thank him for everything he has done and wish him all the very best for the future.

The issue of international taxation and the global economy is one that is rightly receiving attention. What is very clear is that aggressive tax planning is a global issue requiring a global coordinated response.

Ireland is participating constructively and purposefully within the OECD and the EU to help find solutions to these international problems. Ireland’s approach in this area was laid out clearly in the International Tax Strategy published at the time of the last budget, and that is the basis on which we are engaging with partners, in the US and beyond.

In this regard, Ireland is playing an active role in the OECD’s Base Erosion and Profit Shifting (BEPS) project. The BEPS project seeks to better align taxing rights with companies’ substantive activities. BEPS will present challenges to all countries involved in the process. But given the scale of US multi-nationals operations here, Ireland has the potential to benefit from some of the revisions to the international tax policy rules now under discussion.

I am sure that I don’t need to remind this audience that the Government remains fully committed to the 12.5 per cent rate, and to having a clear and predictable tax regime that meets international best practice.

I also believe that we should have similar clarity and predictability in industrial relations. When I travel overseas, I am regularly asked about the manner in which Ireland managed to achieve such as large economic adjustment, while maintaining social solidarity and industrial peace. That is something which we have to preserve. This week, Minister Bruton announced his intention, in line with the Progamme for Government to reform the industrial relations legislation, in order to clear up legal doubt that has emerged in this area. I know that the Minister has consulted widely with stakeholders in developing his proposals, and I believe that he has managed to achieve a good balance in what he is proposing, while bringing clarity to an area which is important for both employers and employees.

It is my own intention, as Minister for Foreign Affairs to continue to work on deepening and strengthening the Irish-US relationship. To this end, the Department, in an exercise led by Ambassador Anderson, has completed a review of its work which recalls the extraordinary depth and energy of the Ireland US relationship.

We know the depth and breath of our links with each other. We will continue to work to enhance the quality of that interaction.

The US is, in every sense, an Ireland-friendly environment, with extremely high levels of mutual goodwill, a common language and shared cultural values.

And yet we know we know we can still do more to tap its full potential. As the economy here recovers, the significant investment funds that have built up over the past few years are in search of outlets, offering a range of new possibilities for Ireland.

The Transatlantic Trade and Investment Partnership (TTIP) has the capacity to be a truly transformative step forward in the EU/US relationship. On both sides of the Atlantic, there is a huge investment of effort in the current TTIP negotiations.

The US economy five years from now will offer opportunities that are not easily predicted today. To take advantage of them we need the personnel and networks on the ground that are sufficiently engaged and alert to plug us into the opportunities as they emerge.

This means people of the right calibre, with deep connections to US business. We also need the structures and mindset to ensure the closest cooperation across the agencies and the diplomatic service.

And our work together needs to be reinforced by maximum openness and interaction with committed and vibrant networks such as yours.

So while in many ways the relationship seems obvious, its very familiarity can be deceptive. It cannot be presumed to look after itself.

The relationship needs continuous renewal and that can only happen if both governments resource it and invest accordingly.

We have taken an important step towards this in opening a new Consulate General in Texas along with an Enterprise Ireland and IDA office. And we continue to work on developing our relationships.

A particular focus of my work has been making the case on behalf of the undocumented Irish. As we have worked to make the case for immigration reform in the US, I have been struck again and again by the deep well of good will that exists between our two peoples.

In concluding, I want to recognise the Chamber and its member companies for your support for community projects in Ireland, be it through provision of volunteer hours, employee fundraising and donations. This is a worthy investment in our social capital and I thank you for it.

I look forward to continuing to work together with all of you for the benefit of building an ever stronger Irish-US relationship.

Address by the Tánaiste to the American Chamber of Commerce