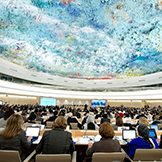 Ireland aligns itself with the statement made by the European Union and adds the following.

Ireland has or will highlight our concerns regarding the human rights situations in Syria, South Sudan, Burundi, Myanmar, Democratic Republic of the Congo, Libya, Cambodia, Ukraine and Sudan during the debates and relevant dialogues of this session.

Since the June session of the HRC, we have witnessed the further deterioration of and threats against fundamental rights to freedom of opinion, expression, assembly and association in many States. We are particularly alarmed by the growing restrictions on the activities of civil society organisations and reprisals against human rights defenders who engage with UN human rights mechanisms. Our collective action in support of the role of civil society organisations is absolutely essential.

Ireland remains deeply concerned by the deterioration of the human rights situation in Turkey where freedom of expression and media freedom are increasingly restricted. The arrest of Amnesty International personnel and other human rights defenders in July was a serious and deeply troubling development, and marked a new low in an already worrying trend. Ireland is also concerned by the severity of the curtailment of civil society in Bahrain, in particular the harassment and reprisals against human rights defenders engaging in national and international advocacy.

Ireland strongly condemns all forms of persecution and violence committed on the basis of religion or belief and call on all States to prevent such acts. We remain deeply concerned about the persecution of religious minoritiesin the Middle East region and Myanmar.

The suppression of civil society organisations through restrictive legislation in the Russian Federation is of growing concern.  We regret the lack of action by the Russian Federation since the June session of the HRC to investigate the reported targeting of the LGBTI community in Chechnya, in particular incidences of extra-judicial killings of LGBTI persons.

We call on the Russian Federation to ensure the safety of all persons who may be at risk of persecution, to thoroughly investigate these reports and to ensure that any individuals found to have committed crimes be brought to justice. Ireland expresses our continuing concern regarding the protection of human rights in Azerbaijan, in particular the failure to implement the rulings of the European Court on Human Rights. We call for the immediate and unconditional release of opposition politician Ilgar Mammadov.

Ireland is deeply concerned by the deteriorating crisis in Venezuela and by reported human rights violations, including unacceptable restrictions on freedom of peaceful assembly and freedom of expression, and mass detentions. We urge the government to investigate the human rights violations reported by the OHCHR, to restore the constitutional separation of powers, to reinstate the powers of the National Assembly, and to engage in dialogue in order to achieve a peaceful solution to the crisis.

Ireland reaffirms its strong and unequivocal opposition to capital punishment in all circumstances and for all cases and is therefore gravely concerned by the plans to reintroduce the death penalty in the Maldives after more than 65 years of moratorium.  We remain deeply concerned by the rising number of extra-judicial killings in the Philippines. We strongly reiterate our call on the Philippines to cease all measures toward a reintroduction of the death penalty and to uphold its international human rights obligations in efforts to combat the illegal drug trade. In addition, Ireland is disturbed by the continued use of the death penalty in Saudi Arabia and Iran, in particular the executions carried out against minors in Iran this year.