Ireland's Service to the UN

Ireland regularly seeks election to various bodies in the UN system. Over the years Irish nationals have served the UN with distinction.

Irish people have served the UN with distinction. Former President of Ireland, Mary Robinson, served as UN High Commissioner for Human Rights from 1997 - 2002 and in March 2013 was appointed as UN Special Envoy for the Great Lakes region of Africa. In July 2014 Mary Robinson was appointed UN Special Envoy for Climate Change. Patricia O’Brien served as Under-Secretary-General for Legal Affairs from 2008 – 2013. Many other Irish nationals have served in a variety of key roles over our 60 years of UN membership.

As part of its commitment to effective multilateral action, Ireland regularly seeks election to various bodies in the UN system:

Ireland also nominates individuals for election to independent expert-level bodies in the UN system. Anastasia Crickley, for example, currently serves on the Committee on the Elimination of Racial Discrimination (CERD).

On an ongoing basis, we participate actively in the work of the six main Committees of the UN General Assembly, and occasionally seek election to individual posts. These committees are: 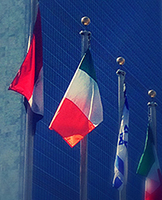