On 30 September 2015, the Consulate General proudly hosted the World Premiere of Fifth Province’s Yeats by Lightning, in partnership with AIB GB.

Yeats by Lightning is a celebration of both the life and work of W.B. Yeats and crosses the boundaries between literature, storytelling, music and theatre to bring his poetry to life.

Donal Cox tells the great poet’s story, focusing in particular on his extraordinary role as a founder not only of Ireland’s National Theatre, but of the broader Irish Literary Revival.‌

Cox impressed upon the audience the strength of Yeats’ unrequited love for Maud Gonne, which inspired so many of his most iconic poems. He also recounted the deep heartbreak and devastation the poet felt upon learning of her return to lover Lucien Millevoye in France, leaving him behind in Ireland. It was, Cox observed, a case of ‘Maud Gone’.

Cox’s storytelling was interspersed with recitations of 16 of Yeats’ poems including He Wishes for the Cloths of Heaven, Easter 1916 and The Second Coming. The entire production took place against the beautiful backdrop of traditional Irish harp music, performed by award-winning Irish harpist Gina Mackay.

Yeats by Lightning was warmly received by its first audience, which comprised prominent members of the business and cultural spheres. 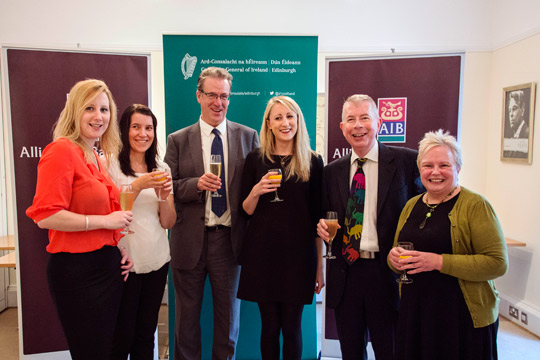