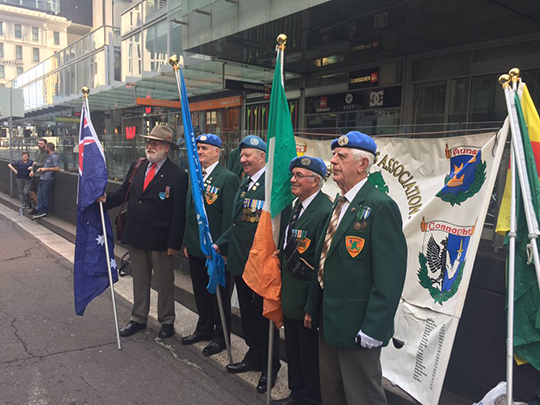 The Consulate was honoured to support members of the United Irish Ex-Services Association on the Anzac Day Parade in Sydney. The UIESA comprises of retired members of the Irish Defence Forces, including several who served in peacekeeping missions abroad, and this year they were led by John O'Mahoney, who has been decorated for bravery during his service in Lebanon.

The Consulate was also delighted to be able to support the UIESA, through the Department’s Emigrant Support Programme, with funding towards the costs of blazers for their members which were worn for the first time on the parade.

Early that day, the Consul General, together with a number of other Consul Generals and State and Federal politicians, took part in a wreath-laying ceremony at the Cenotaph in central Sydney to honour those who served in the Anzac forces, including the many Irish soldiers.