Minister for Agriculture, Food and the Marine Michael Creed

Recognising the importance of China for Ireland, Minister for Agriculture, Food and the Marine Michael Creed T.D. decided to make China the first place that he led a trade mission since taking office.

China offers enormous potential for the Irish food and drinks industry to realise the targets set in Ireland’s FoodWise 2025 strategy. Diversification of markets is a key goal of this strategy. Exports to China alone grew by 16% in 2015 maintaining its position as Ireland’s fifth most important market and the second largest for dairy and pork.

Minister Creed met with Zhi Shuping, the Minister responsible for AQSIQ and discussed market access and registration issues of key concern to Ireland, Creating a platform for further technical engagement between experts from both sides on these issues. The Minister also met with Ms Mingzhu Wang, Vice- Minister for the Chinese Food and Drug Administration (CFDA). The Ministers co-hosted a major seminar on sustainability and food security. The Ministers agreed that they would continue to co-operate closely, including through the implementation of an internship programme which will see Chinese officials come to Ireland to spend time in the Department and its agencies in order to familiarise themselves with Irish Food Safety systems. 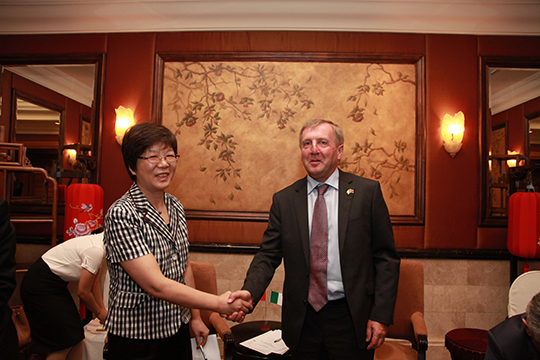 The Minister’s visit was designed to:

The visit was also a celebration of the tenth anniversary of a very successful internship programme for Chinese interns in Ireland which has seen some 40 Chinese officials receive training in Ireland. 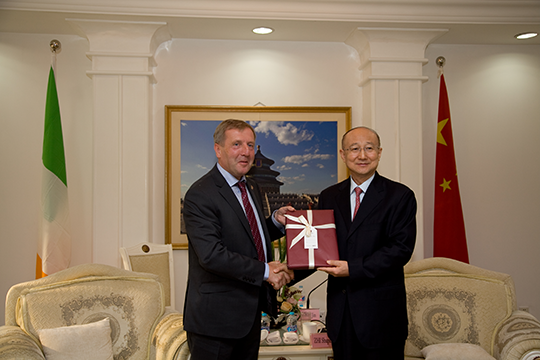 A Pork and Seafood Showcase with 200 guests was held in the Irish Embassy to highlight the role of meat and seafood exports to China, providing an opportunity to develop business connections between Irish companies and the select group of invitees from the Chinese food industry. Both our seafood and pigmeat sectors have seen their exports double in the last three years while our dairy exports now mark China as our second largest export market after the UK.

Minister Creed also witnessed the further development of business relations between Sanyuan and and Irish Dairy companies. This company has a history of trading with Irish dairy processors. Minister Creed remarked “I am delighted that Dairygold and Teagasc, were able to sign a Memorandum of Understanding with Sanyuan. This is a fitting testament to the quality and reputation of the entire Irish dairy industry.” 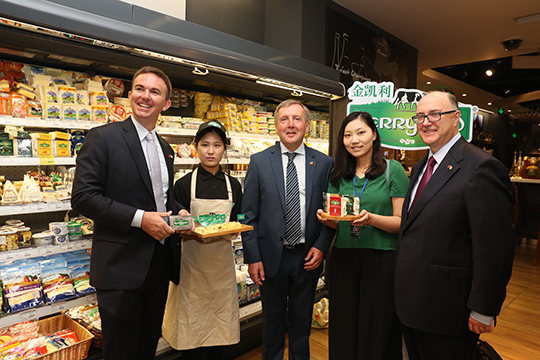 The Minister also held a successful meeting with the China National Cereals, Oils and Foodstuffs Corporation (COFCO). The COFCO Group is China's largest food processing, manufacturing and trading company, with revenues of more than €40 billion, and already purchases a significant volume of Irish food. In addition the Minister met with China Animal Husbandry Group and held a number of meetings with local and Irish companies during his visit.