Screening of the Irish movie “Calvary” 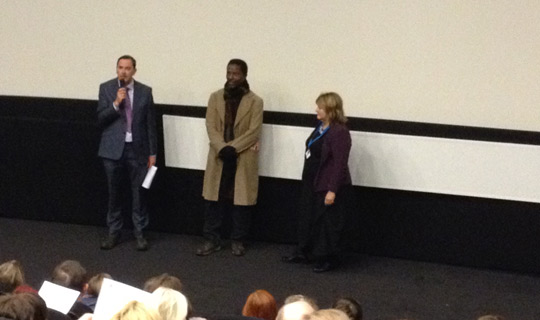 On Friday, 21.11.2014, Ambassador Frank Flood and the Embassy’s staff members attended the screening of an Irish movie “Calvary” at the Tallinn Black Nights Film Festival 2014.

Tallinn Black Nights Film Festival is a unique event combining a feature film festival with the sub-festivals of animated films, student films and children/youth films. The festival aims to present Estonian audiences a comprehensive selection of world cinema in all its diversity, providing a friendly atmosphere for interaction between the audience and filmmakers from all around the world.

“Calvary” is a 2014 Irish drama film written and directed by John Michael McDonagh.

The Ambassador, along with one of the cast members Isaach de Bankolé and the director of the Black Nights Film Festival Tiina Lokk, made short introductions before the screening of the movie.