In order to celebrate the 150th anniversary of the birth W.B. Yeats, a poetry night was held in the Embassy. 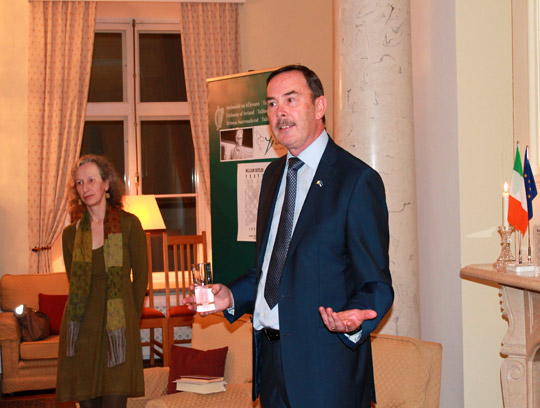 In 2015 Ireland celebrates the 150th anniversary of the birth of Ireland’s Nobel Prize-winning poet, William Butler Yeats. A poet and playwright, Yeats is widely considered to be one of the greatest poets of the 20th century. Yeats was born on June 13th 1865 and in 1923 he was awarded The Nobel Prize in Literature for his always inspired poetry, which in a highly artistic form gives expression to the spirit of a whole nation.

In order to celebrate his life and works and to mark the 25th anniversary of a collection of Yeats' poems being first published in Estonian (Rahva Raamat 1990, translations by Märt Väljataga and Ants Oras), a Yeats' poetry night was hosted in the Embassy Residence. Moderator for the event was the local Irish community member and a lecturer in Tallinn University Institute of Humanities, Miriam McIlfatrick. Märt Väljataga spoke about his experience of translating Yeats' poems, and musicians Jaak Johanson and Krista Citra Joonas provided musical interludes inspired by Yeats and Ireland. Many of the guests, among whom were translators, writers, poets, and other friends of Irish literature, shared their experience inspired by W.B. Yeats and/or his poem(s).

The Embassy will also hold a Yeats function on January 15, 2016 to launch a Yeats calendar featuring poems in Estonian and English.