History of the Embassy

About the Embassy and the former Irish Ambassadors to Malta. 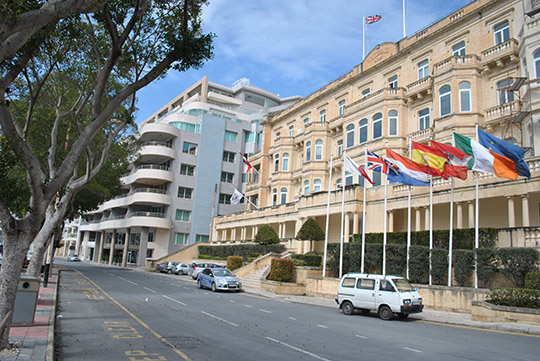 Whitehall Mansions is a five storey building located on the western shore of Msida Creek in Marsamxett harbour. The Irish Embassy shares the building with the British High Commission and the Embassies of Spain, Austria and The Netherlands. The building is perhaps best known locally as being the home of the Wrens (Women's Royal navy Auxiliary) after WWII to 1972. Msida Creek also served as the base for submarines operating out of Malta in WWII.

Historical Links between Malta and Ireland

Historical links between Malta and Ireland

The links between Ireland and Malta are as varied as they are surprising.

In 1895 Cardinal Michael Logue, Primate of All Ireland, paid a short visit to Malta and was given a rousing welcome, so much so that the City of Floriana earned the nickname 'Tal Irish' ('The Irish') which has stuck to this day. On leaving Malta on the 17th of December, 1895, he was accompanied to the jetty by the Vilhena Band Club of Floriana and a great crowd. Cardinal Logue was so impressed by this show of affection that on arriving in Rome he intervened with the Vatican authorities to have the liturgy of the Feast of Saint Publius, Patron Saint of Floriana (and of Malta), elevated to 'first class'. As a sign of gratitude the Floriana parish commissioned a portrait of Cardinal Logue which today still graces the sacristy of the church of Saint Publius in Floriana.

In the summer of 1905 Floriana played a friendly match against the Royal Dublin Fusiliers at the Floriana Parade Ground. After the match which Floriana won 2-1, the Irishmen gave their green and white striped vests to Floriana who immediately adopted them as their new official colours which they play in to this day. Some historians contend that the nickname 'The Irish' was born at this stage. The Embassy is indebted to Mr Nigel Holland for his work in revealing the connections between Ireland and the city of Floriana.

The Irish have also played a role in Maltese politics. In the 1920's Doctor Michael Dundon from Patrickswell in Limerick led the Parliamentary Labour Party and was responsible for the Health portfolio.

A rather poignant story relates to the grave of a young Irishman in San Lawrenz. A 23 year old marine, Thomas McSweeney, originally from Kanturk was executed on HMS Rodney on 8th of June 1837. According to an article by Liam Collins in the Irish Independent of 6 February 2011 Thomas' grave is said to have miraculous properties and locals relate tales of a ghost sighting. Liam reports that Thomas' tomb had been maintained by devotees with flowers and candles being laid on a regular basis.