Few people know that the only non-Mexican represented in statue at Mexico City's Ángel de la Independencia is an Irish-man, William Lampart, of County Wexford.

A series of events are to take place at the Ángel de la Independencia, the Archivo General de la Nación and Centro de Estudios de la Historia de México Carso to commemorate his birth 400 years ago.

Lampart (or Don Guillén de Lampart as he is known in Mexico) is a key figure, not only in the context of the history of the Irish in Latin America but as a precursor to Mexican independence. Lampart, a soldier, poet, theologian and mathematician, was born in Wexford, studied in London and Madrid and served as an officer in the Spanish army. He was sent on a mission to New Spain (Mexico) by the Duke of Olivares in 1640. He quickly developed strong sympathy for the plight of indigenous Mexicans and African slaves in new Spain and, by the early 1640's, had drawn up detailed plans for an insurrection against the Spanish Crown. His writings include what is often described as the first Declaration of Independence in the Spanish indies, as well as a proposal to the Spanish King Felipe IV for liberating Ireland from English rule.

His 'Proclama Insurrecctional' for New Spain is a particularly fascinating and deeply radical for it's time - Lampart proposed the outlawing of slavery, land reform, social justice and equality and the establishment of a parliamentary democracy; all this nearly 150 years before the French Revolution and more than 220 years before the Thirteenth Amendment to the US Constitution abolishing slavery.

Lampart was arrested in 1642 and handed over to the Inquisition and imprisoned for 17 years. During his time in prison, he became deeply engaged with the plight of the Jews under the Inquisition, many of whom were imprisoned with him and defended them in humanitarian, moral and theological terms during his audiences with his jailers. He also composed 880 psalms in Latin during his imprisonment. William Lampart was burned at the stake in Mexico City in 1659. 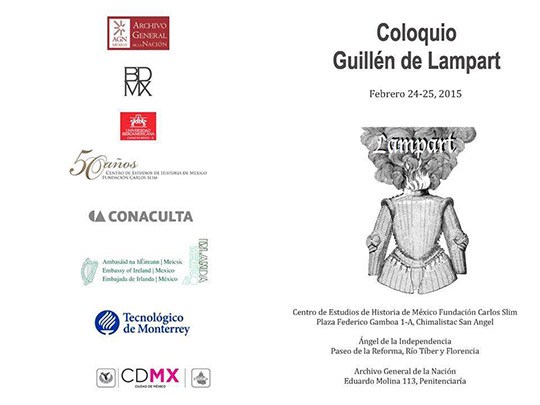