In 2013 Korea and Ireland celebrated 30 years of diplomatic relations. However relations between our two countries stretch much further back 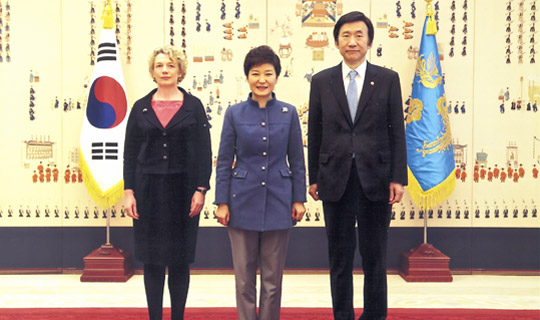 The relationship between Ireland and Korea is a strong and positive one with a growing potential for trade and investment opportunities. Our two countries share many of the same perspectives and policies on the international issues and global challenges and we work closely together in the UN and other international organisations.

2013 marked the 30th Anniversary of diplomatic relations between our two countries. An important element of anniversary celebrations was the establishment of a memorial in Seoul to those of Irish birth and heritage who fought in the Korean War, a contribution that is now well recognised and much appreciated by the Korean government and people.

There is significant interest in and recognition of Irelands return to recovery and growth, following the severe impact of the global financial crisis on our economy. Our successful exit from the EU/IMF programme was warmly welcomed and had a lot of resonance in Korea, where memories of its own IMF programme in the late 1990’s remain strong.

Trade between Ireland and Korea, which had dipped during the crisis, recovered well in 2012 and 2013, with the services sector in particular showing strong growth.

The EU-Korea free trade agreement (FTA) provides a positive framework for further developing Irish-Korean trade and gives exporter from Ireland and other EU member states a crucial competitive advantage. The Embassy and Agencies actively monitor its implementation and we are ready to pursue any issues that arise for Irish exporters under the FTA.

Korea has been among the fastest OECD growing OECD countries during the past decade. It weathered the financial crisis better than many others and has rebounded with a growth rate at about 4% since mid-2013. The new growth strategy of the President Park administration aims at fostering a ‘creative economy’.

Here in Seoul, the embassy, enterprise Ireland (EI) and IDA Ireland operate together in Ireland house. There has been a considerable strengthening of the agency presence here in the past two years, with IDA Ireland reopening its offices in 2012 and an expansion in the EI presence in the first half of 2014. Sectors of particular interest include medical and pharmaceutical products, internationally traded services, the agri-food sector, ICT, life sciences and engineering

Irish in the Korean War

Irish in the Korean War

The sacrifice of those Irish who fell, serving with the US forces during the Korean War was acknowledged by the erection of an Irish Korean War Memorial in 2006 in Greenwood Cemetery, Brooklyn, New York funded by the Irish government. By a special Act of the United States Congress on 30 October, 2003 these 29 soldiers were awarded US citizenship, posthumously.

Under a joint Embassy/Irish Association of Korea project and in cooperation Royal Ulster Rifles Association and the relevant Korean authorities, in April 2013 a memorial to those of Irish birth and heritage who died during the Korean War was erected at the War memorial of Korea.

Ireland was not a member of the United Nations at the time and was not official a contributor to the UN Command. However, Irishmen enlisted in the British Army from both sides of the border and we know that at least 109 Irish born would die serving with the Royal Ulster Rifles alone. Irish emigrants to the US either were drafted or enlisted; at least 30 Irish born men are known to have died in US uniform. Irish born also fought with Australian, New Zealand and Canadian forces. Innumerable men of Irish heritage also fought and died in the war.

In addition to the soldiers who died, the memorial also recognises the eight Columban priests who died; seven of whom were Irish born and one Patrick Brennan from Chicago would appear, from his name, to have had Irish connections. In addition, the memorial records the death of Sr. Mary Clare (Clare Emma Witty) born in Enniskerry, who came to Korea as a sister of the Community of St. Peter. Here she founded the Society of the Holy Cross. This march also claimed the life of the one of the Columban priests. Monsignor Thomas Quinlan survived the march and wrote of his experiences. He subsequently returned to Ireland before journeying back to Korea.

The memorial was dedicated in a moving ceremony in the presence of twelve Irish born veterans of the Korean War, the Minister of Patriots and Veterans Affairs of Korea and members of the Irish community.

The memorial was supported by the Government’s Emigrant Support Programme which provided 15 million Korean Won or approximately €10,000 supplemented by fundraising by Irish Association of Korea.

The first documented record to confirm the arrival of Irish people on Korean soil, albeit briefly, refers to members of the U.S. Marine Corps in June 1871. On 10 June the American military in a five ship flotilla attacked Choji Garrison on Gangwha Island. The Center of Military History of the United States Army, lists among the Medal of Honour Recipients for the Korean Campaign of 1871, the following: US Marine Private John Coleman born 9 October, 1847, Ireland, US Marine Private James Dougherty born 16 November, 1839 of ‘Langhash, Ireland’, US Marine Patrick H. Grace born 1835 Ireland and Michael McNamara born 1841 of ‘Clure, Ireland’.

The next reliable recorded account of an Irish presence is that of William George Aston, born Derry 28 August, 1840 who died on 22 November, 1911 in Devon, England. Aston served as British Consul-General in Korea from 1884 to 1885.

Following on from this Sir Nicholas Roderick O’Conor, born in 1843 in Dundermott, County Roscommon served as British Minister to the Empire of Korea in Seoul from 1892 to 1895.

Another significant historical figure in Korea was John Mc Leavy Brown. He was born in 1835 in Magheragall, Lisburn, County Antrim. Educated at Queen’s College, Belfast and Trinity College Dublin, Brown joined the British Customs Service in 1873. He was appointed by King (later Emperor) Kojong as Financial Adviser and Chief Commissioner of Customs on the 15 October 1893. Brown was to remain head of Customs in Korea from 15 October 1893 until 26 November 1905. Brown became something of a consultant in the planning of modern day Seoul as well. He was involved in the part restoration and lay-out of what is, today, Tapgol Park (formerly Pagoda Park) close to the popular tourist Insa-dong area.. Brown’s legacy, his colleagues of the time noted, was in the erection of a series of lighthouses around the Korean coast, starting with Sowolmido.

The next recorded Irish presences were: Sir John Newell Jordan who served as British Consul-General in Seoul from 1896, becoming Chargé d’Affaires at the British Embassy in 1898 and Minister-Resident from 1901 until November, 1905. Jordan was born on 5 September, 1852 in Balloo, County Down and educated at Queen’s College Belfast.

At Yangwhajin or Foreigners’ Graveyard in Seoul there is among the gravestones that of Charles David Morris who was born in Queen’s County now County Laois on 10 May, 1869 and who came to Korea in 1901 as a Methodist Missionary.