Frances Ruane (ESRI) on the Irish economic recovery: “Is it real?” 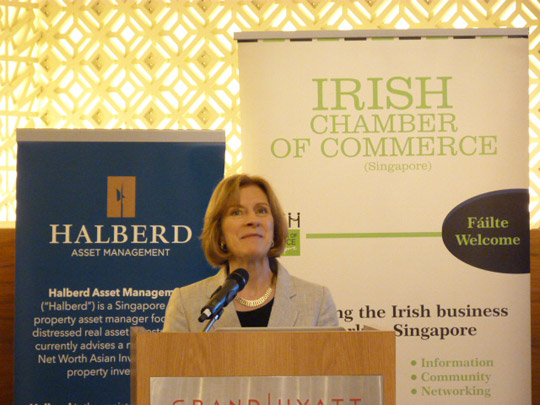 On her second visit to Singapore in twelve months, Professor Frances Ruane, Director of the Economic and Social Research Institute of Ireland gave a breakfast briefing to the Irish Chamber of Commerce, Singapore analysing the strength of the recovery in the Irish economy.

Welcoming Prof. Ruane on the occasion, incoming President of the Chamber, Conor McCoole, said: “It’s a great pleasure to have Ireland’s top economist back for the second time in a year. It’s a reminder of just how relevant Singapore is to Ireland – and vice versa – and an important opportunity for Irish business in Singapore to engage with one of the key influencers of economic policy at home.”

Pointing to caveats such as the continuing public expenditure targets and Ireland’s dependence as an exporter on the economic performance of our traditional trading partners, Professor Ruane noted positive indicators in the domestic economy such as growth in retail and car sales, the reduction in unemployment and increased income growth, all of which provided evidence of real economic recovery.

Prof. Ruane presented data collated in relation to GDP growth from 1949 onwards which was a strong indication of the recovery in GDP from the recession in 2009 onwards. Additional positive data provided and explained indicated Ireland’s growth relative to the EU average.

She noted that the Irish economy is still experiencing challenges on several fronts, most evidently debt as a percentage of GDP.

Professor Ruane noted that key to Ireland’s recovery in the short term is dependency, as a net exporter, on the recovery and stability in the international environment, the ability of household spending to increase, export growth to continue to increase and lastly but equally importantly the ability to meet public expenditure targets.

Finally Prof. Ruane looked at the economic assessment for 2015, which following the strong growth in 2014 is expected to see growth of 4.6% and a reduction in unemployment below the 10% threshold – alongside attendant risks associate with the performance of other Eurozone economies and the broader regional challenge of low inflation and low growth.