Leading economist Alan Ahearne to give talk on Irish Economy 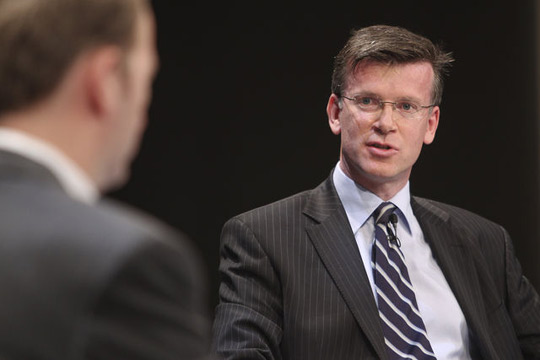 The Embassy of Ireland and the Spanish-Irish Business Network invited one of Ireland’s leading economists, Professor Alan Ahearne, to Madrid to talk on the theme of the Irish economy. On 20 November he addressed a crowd of approximately 80 in the city-centre offices of law firm Gómez-Acebo & Pombo Abogados on the topic “Luck of the Irish? The Turnaround of the Irish Economy”.

Ahearne is Head of Economics at the National University of Ireland, Galway, external advisor to the IMF, member of the board of the Central Bank of Ireland, former advisor to Ireland’s Minister of Finance, and former senior economist at the US Federal Reserve Board.

Following an introduction by Ambassador David Cooney, Ahearne drew on the latest available data on Irish GDP growth, consumer sentiment, business sentiment, export and employment growth to support his conclusion that we are witnessing a broad-based recovery in the Irish economy, while warning that certain risks remain. Alan Ahearne Presentation.

His talk was followed by a lively exchange with audience members on issues such as austerity vs. stimulus, house prices, and the role of the ECB.