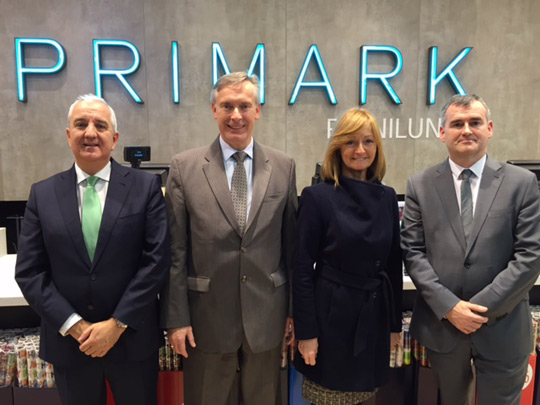 Ambassador David Cooney and his wife, Geraldine, visited the biggest of Primark’s 40 stores in Spain at the Plenilunio Shopping Centre in Madrid. Ambassador Cooney met with Primark’s José Luis Martinez de Larramendi, Primark’s Director General for Iberia, and Commercial Director Iberia, Stephen Mullen. He was briefed on Primark’s expansion plans, including the opening of its new landmark store on Madrid’s Gran Via and the expansion of operations into the US, both of which will take place next year. Primark is an Irish subsidiary of ABF plc with 297 stores in 9 countries, employing 57,000 people. It is the biggest unit volume clothing retailer in Spain where it employees 7,000 staff. Most of Primark’s workers are young people among whom unemployment is currently at its highest.