Relations between Ireland and Switzerland run deep and wide across many areas of activity.

Ireland and Switzerland have long enjoyed excellent relations, politically, culturally and economically. These relations have been documented as far back as 612 when St. Gall was credited with the foundation of a monastery in the Swiss city of St. Gallen. Ireland established an Embassy in the capital city of Berne in 1940.

Over the years Ireland has developed a close relationship with Switzerland in the area of foreign policy as a result of shared views on neutrality, disarmament, human rights issues and peace keeping.

For many years Ireland and Switzerland have had a vigorous economic and trading relationship. This is underlined by the economic figures: Switzerland is Ireland's 5th largest export market with bilateral trade of over 10 billion Euros. Ireland has also been an attractive country for inward investments from Switzerland particularly in the pharmaceutical field and also financial services. For example Zurich insurance has its European headquarters in Dublin employing over 1,000 people.

The Irish Community living and working in Switzerland continues to grow and is now estimated at 8,000. There has also been an increase in the number of Swiss people visiting Ireland with a record 88,000 visitors last year. Swiss people greatly enjoy our culture, music, literature and the beauty of the Irish countryside. The James Joyce Foundation based in Zurich (where Joyce is buried) also fosters a great interest in Joycean studies amongst Swiss people.

The Minister for Foreign Affairs and Trade, Charles Flanagan, T.D, visited Switzerland on 6-7 May at the invitation of the Head of the Federal Department of Foreign Affairs, Federal Councillor Didier Burkhalter. They held discussions on a range of key issues including nuclear disarmament, the OSCE and sustainable development. We look forward to a continued intensification of Swiss-Irish relations in the coming years. 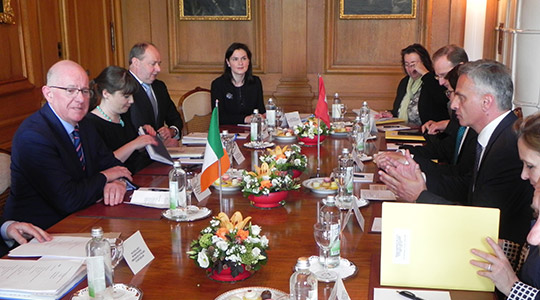