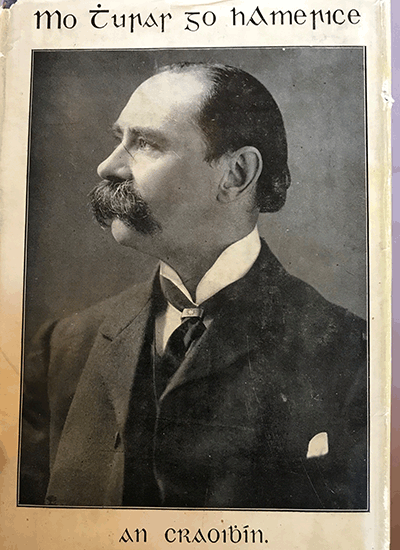 For Irish public figures in the latter part of the 19th century and the opening decades of the 20th, a tour of America was a well-trodden path. They crossed the Atlantic because they knew that the Irish in America represented a rich vein of moral and financial support for Irish nationalist movements.

Douglas Hyde, co-founder of the Gaelic League in 1893, and later Ireland's first President from 1938 to 1945, paid two long visits to North America in 1891-92 and again in 1905/06. Unlike most Irish visitors, Hyde published a detailed account of his travels which provides a picture of Irish America as it was more than a century ago.

The son of a Church of Ireland clergyman, Hyde grew up in Roscommon where he acquired a knowledge of the Irish language from local people there and it became his lifelong passion. After studying theology at Trinity College, Dublin, he was offered a lecturing post at the University of New Brunswick in Canada and spent the academic year there before travelling to Boston and New York on his way back to Ireland.

In those two heavily Irish cities, he delivered well-attended lectures in which he set out some of the ideas that later made their way into his speech on 'The Necessity for De-Anglicising the Irish Nation'.

Speaking in New York, he was keen to highlight the linguistic pedigree of the Irish language. It was not "a poor, mean, limited language", but "a vast, varied, very opulent one" which "stands upon an equal footing with Greek, Latin and Sanskrit." And as far as literature was concerned, there was "an enormous mass of Irish literature ... (which) has not only never been equalled but never been approached either in age, variety, or value by any vernacular language in Europe". It was "the language of the Bards and Brehons, of the Saints and sages."

It is not difficult to imagine how well such sentiments would have gone down with his Irish American audience. Hyde then took aim at those Irish who did not treasure their native language. "It is", he said, "a most frightful shame the way in which Irishmen are brought up, ashamed of their language, institutions and of everything Irish."

Hyde made it plain that he did not envisage Irish ever replacing English in Ireland. What he wanted was to see Irish established "as a living language, for all time, among the million or half a million who still speak it along the west coast, and to ensure that the language will hold a favourable place in teaching institutions and government examination." According to the 1891 Census, there were 680,000 people in Ireland who could speak Irish, down from 1.5 million 40 years earlier.

When Hyde returned to Ireland, he was elected President of the National Literary Society and in that capacity delivered his famous appeal to reverse the Anglicisation of Ireland. Hyde's speech was perhaps the single most influential statement made during the two decades before the Easter Rising when a new spirit of idealism entered into the Irish political constellation.

In his speech, Hyde called for the building up of “an Irish nation on Irish lines” so as to "once more become what it was of yore: one of the most original, artistic, literary, and charming peoples of Europe."

Those were inspirational ideas and the League grew rapidly under Hyde's stewardship attracting the devotion of a new generation of Irish people, better educated and more restless than their predecessors. By 1903, there were some 600 Gaelic League branches all over Ireland and up to 250,000 people taking language lessons.

In November 1905, the League sent Hyde on a fundraising tour of America which lasted a full 7 months. The visit was arranged by the prominent New York lawyer, John Quinn. Those familiar with Irish literary history will recognise Quinn's name for he later provided financial support to both WB Yeats and James Joyce. He evidently did a superb job of organising Hyde's itinerary as his account of the visit, Mo thurus go hAmerice (My American Tour) reveals that Hyde spoke in some 55 cities on the Eastern seaboard across the mid-West, as far south as Memphis and along the West Coast. His visit attracted considerable media attention wherever he went.

His first appearances were in two of America's most prestigious universities, Harvard and Yale. In New York, he spoke for 90 minutes to a capacity audience at Carnegie Hall telling them how, in the 12 years of its existence, the Gaelic League had transformed Ireland from a miserable province into a proper nation.

Everywhere he went he was well received and drew significant audiences for his lectures which generated considerable financial support for the League. In Pittsburgh, he addressed two events with audiences of 1,800 and 2,500. In Philadelphia, he attracted 2,600 which yielded a collection of $400. His visit to Chicago produced nearly $7,000. An appearance at San Francisco's newly-built Tivoli Opera House yielded $1,200 although the money he collected there was returned for the relief of victims of the earthquake that hit the city shortly after Hyde's visit. His tour was not without opposition and he suspected supporters of the United Irish League (the support organisation for the Irish Parliamentary Party) of trying to spike his fund-raising efforts on behalf of the Gaelic League. On his return to Ireland, Hyde handed over £12,400 to the League as the proceeds of his American tour.

As he made his journey across America, he met plenty of people who spoke Irish and whose company he relished, but there were others among the more well-to-do Irish who appalled Hyde because they seemed to be ashamed of their heritage.

On one of his two visits to Washington, the Professor of Irish at the Catholic University, Dr Ó Duínn, accompanied him to the White House where President Theodore Roosevelt hosted him at lunch during which he revealed that he had recently published an essay comparing the old Irish stories with the Norse sagas! As a child, he had learned about Cúchulainn and Fionn Mac Cumhaill from his Irish nursemaids. For his part, Hyde spent the long train journey through Wyoming and Utah translating one of Dante's cantos into Irish! He was especially impressed by America's west coast and Seattle was the place that most reminded him of home.

Hyde's account of his American travels diligently records the names of the people he met and the places where he spoke but, presumably in an effort to avoid controversy at a time when he was about to become President of Ireland, he offers only limited commentary on his host country. His book does, however, reveal a number of things.

First, it highlights the scale and prominence of the Irish-American community as well as their passionate commitment to Ireland. Delegations of leading Irish Americans often came to welcome him at train stations around the country.

Second, the fact that he was able to make frequent use of Irish in his public appearances confirms that many of the immigrant Irish in the decades after the Famine had come from Irish speaking backgrounds.

Third, Hyde showed phenomenal energy levels during his US tour, travelling incessantly and often finishing his days at convivial social functions that sometimes lasted into the small hours. He was intrigued by American cocktails including Mint Julep which he sampled in Washington's Cosmos Club.

Finally, the manner in which he was fêted at the country's major universities illustrates the extent to which the Irish literary revival had by that time captured international attention.

And what are we to make of Hyde's contribution to the Ireland of his time? It was, in my view, immense in that he helped set up the most influential nationalist movement that emerged during the decades preceding the Easter Rising of 1916. The Gaelic League energised a generation of Irish people, many of whom took leading roles in our independence struggle. While WB Yeats was ambivalent about Hyde, whose stringent advocacy of de-Anglicisation threatened his own position as an Irish poet, in his Nobel Prize speech in 1923 Yeats gave Hyde due credit.

Dr. Hyde founded the Gaelic League, which was for many years to substitute for political argument a Gaelic grammar, and for political meetings village gatherings, where songs were sung and stories told in the Gaelic language.

Hyde's sojourn in America suggests that many in Irish America bought into Hyde's vision of linguistic and cultural regeneration even as they were busy becoming American while maintaining an intense interest in the affairs of their ancestral homeland.