Blog on the American launch of the Cambridge History of Ireland 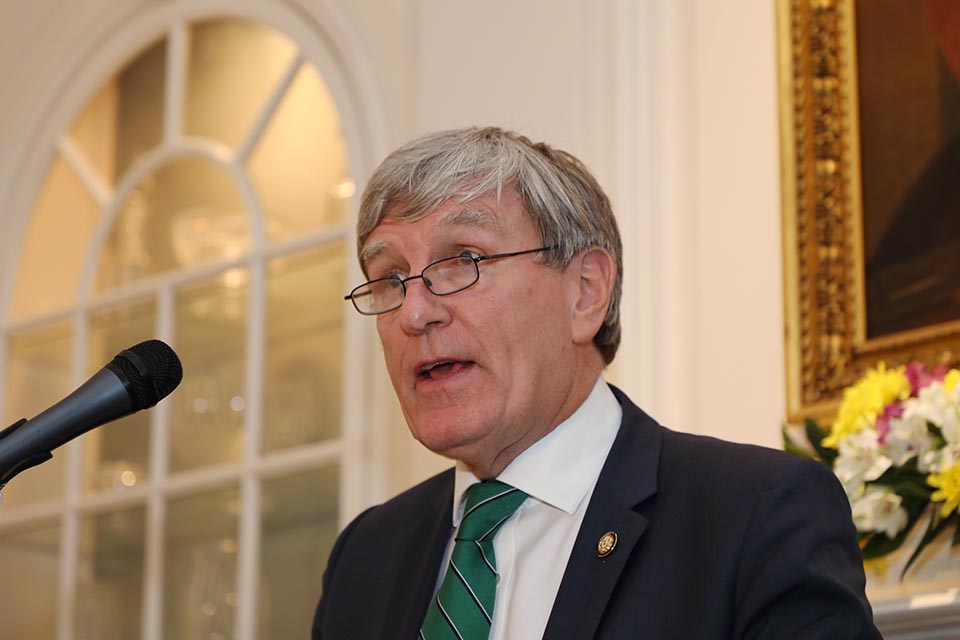 We had the pleasure this week of welcoming former US Vice-President, Joe Biden, to our Embassy residence for the launch of the new, four-volume Cambridge History of Ireland.

In introducing Vice-President Biden, I offered some reflections on the Cambridge History and the light it throws on the American dimensions to Ireland’s national story. The Cambridge History of Ireland is a major addition to the already impressive range of titles published in recent decades which have explored so many aspects of Irish history.

It was often complained in times gone by that we Irish had a one-dimensional view of our history conditioned by an unrefined nationalist narrative. In recent decades, however, our understanding of the Irish past has certainly undergone considerable elaboration. Naturally, there is much that remains to be done and no country should ever have too settled a view of its history.

As a nation, we are fortunate to have so many people outside of Ireland who take an active interest in our affairs and who wish us well. This certainly applies to the study of Irish history and this present publication has 100 contributors from 38 academic institutions in 8 countries. US-based academics are well represented in these volumes. The United States is a home away from home for Irish studies and I have been more than impressed by the deep commitment I have encountered on the part of so many American universities to the study of Ireland.

This means that our historical imagination is being fed from various sources including by scholars who view our affairs from outside of Ireland. Many historians who write about Ireland are neither Irish-born nor of Irish descent. Moreover, many academics based at Irish universities have experience of studying overseas. This all represents a very healthy antidote to the temptations of insularity.

As a historian, I have dipped into these volumes with special interest. The chapters I have read have been both scholarly and accessible. They come from the pick of the current generation of Irish historians whose careers have spanned the past 40 years or so, although many contributors are decades younger than I am.

This means that the Cambridge History has been written by historians who have personally witnessed dramatic changes in Ireland. The older ones among them have lived through a generation of conflict in Northern Ireland succeeded by two decades of peace. All have seen Ireland become a considerable success story; a country now marked by immigration more than emigration with 17% of our population born outside our State; a country that is now on an equal footing with the United States as an advanced economy with a diverse and tolerant society.

With the unfolding of our decade of commemorations, the past few years have brought us face to face with the key period in modern Irish history, the years between the Home Rule crisis of 1912-1914 and the advent of independence and civil war in 1922-23. This has, I think, been a broadly positive experience, as our meditation on, for example, the Easter Rising and its aftermath, inspired curiosity about and admiration for what I will call with a nod to an often-used American phrase, Ireland's 'greatest generation'. We have not witnessed an unleashing of political passion as some had feared. We have, I think, cast a calm, measured and inquisitive eye on the 'terrible beauty' of 1916.

There is no sense in which we have reached an 'end of history' moment in Ireland. The ongoing political stand-off in Northern Ireland and the uncertain implications of Brexit will ensure that there can be no complacency about the future of our island or of our relations with our neighbours.

Why should this Cambridge History be of interest in the United States? The answer derives from the uniqueness of Irish-US relations. It relates to the impact on the United States of the 4 million Irish immigrants that came to this country in the last 6 decades of the 19th century. This added to the 1 million who had arrived from Ireland earlier in the 19th century and the many who came during the 18th century whose story is told in two chapters on Irish emigration.

Their loss was a demographic catastrophe for Ireland, but they represented an inestimable gain for the United States. The Irish helped build this country - literally. They also fought for it. Of the 769 Congressional medals of honour awarded to those born outside the United States, 261 have gone to Irish-born individuals, a number far in excess of any other immigrant group. Indeed, on September 18th each year we are reminded of the sacrifice Irish people and people of Irish descent made for this country, for that is the anniversary of the Battle of Antietam of 1862, a day on which more than 500 members of the Irish Brigade lost their lives.

And those who made their way to the United States in those dark 19th century decades never forgot where they came from. They carried with them a resentment about the economic and political conditions that had brought about their departure from Ireland. They and their descendants maintained a strong interest in the affairs of their homeland and were staunch in their support of Irish political and cultural movements.

Irish Americans helped keep the flame of Irish independence alive in the closing decades of the 19th century and their support for advanced nationalism in Ireland was an important influence in bringing about the Easter Rising of 1916. Even after independence, Irish American identification with Ireland continued. In the decades following the outbreak of conflict in Northern Ireland in the late 1960s, many Irish Americans were sympathetic to the Republican movement, but constitutional nationalism gradually won the argument and American influence operated as a positive factor in the evolution of the Northern Ireland peace process. The Cambridge History gives due credit to Irish American politicians such as Senator Edward Kennedy and Speaker Tip O’Neill for winning the support of the Reagan and Clinton Administrations for the kind of negotiated settlement favoured by the Irish Government.

Economically, American influence on Ireland has been transformative. From the 1960s onwards, and especially in the past 30 years, US investment is credited with reshaping our industry, helping us to become an export-oriented economy with particular strengths in information technology, computer software, pharmaceuticals, and medical devices. Today, a new chapter of the Irish-American story is being written by the surge in Irish investment in the US, with some 500 Irish companies now employing 100,000 people across all 50 US States.
There cannot be many countries in the world with a more varied and intensive set of connections – demographic, political and economic - with the US than Ireland has. A particular strength of our unique contemporary relationship is the presence here of some 33 million Americans with an Irish heritage.

And that brings me to VP Biden, who is a true representative of Irish America. He is someone who, like so many others, is proud of his Irish heritage and shaped by it. He has long been an influential friend of Ireland and not least during his two terms as Vice-President. His interest in, and support, for Ireland is something we value and cherish. That is why we are so pleased and honoured to have Vice-President Joe Biden with us to help with the American launch of the Cambridge History of Ireland.

Daniel Mulhall is Ireland’s Ambassador to the United States. 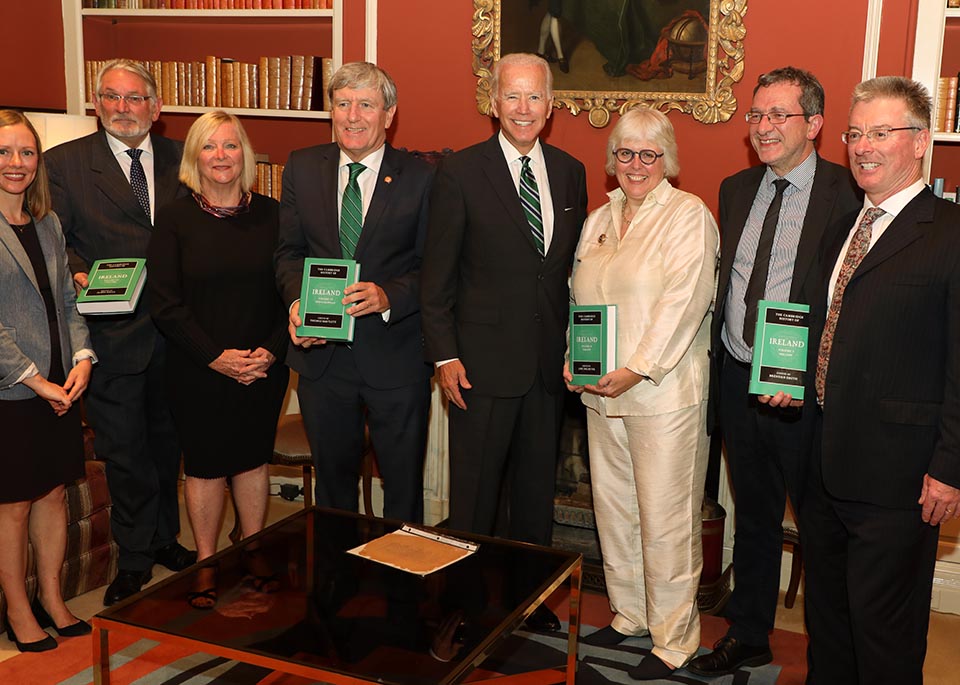