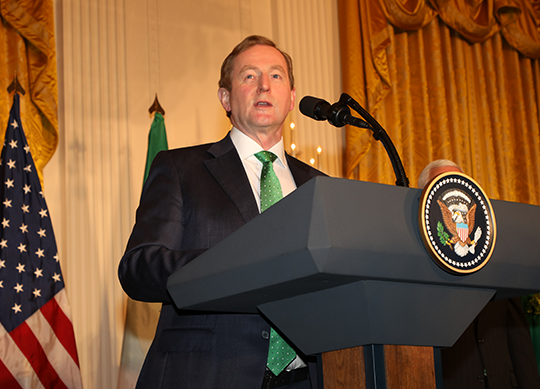 It is a great honour to be back again in the most famous house in the world to celebrate St. Patrick’s Day. The most special of days for Irish men, and Irish women, and those of Irish descent. Since I have had the privilege of being elected as Taoiseach in 2011, I’ve had the pleasure of being here in the White House each March to mark the enduring connections between our country and the United States.

Fionnula and I would like to sincerely thank President Trump for so graciously continuing this great tradition of hospitality which means so much to Irish people everywhere. I’m proud sir, to have the opportunity to contribute to maintaining and developing relations between Ireland and the United States, particularly at the beginning of a new era in our country’s relationship following your election, Mr President.

Let me congratulate you, and wish you and your Administration the very best as you begin your term of office. This job, the job you hold is exceptionally demanding and exceptionally difficult. The United States remains the most influential, as well as the most powerful, country in the world.  You hold the hopes and the future of America, and indeed the world in your hands.

Let me thank you for giving so much of your time today to this visit, we had an excellent meeting, a first class meeting this morning in the oval office, I’m not there very often, where we discussed a variety of important issues of mutual concern. And I want to assure you sir of our commitment to working closely with you and your Administration as you face the many challenges up ahead.

The ties that bind our two countries are deep and historic, and Ireland and the United States have a unique relationship that goes back to the earliest days of the original thirteen colonies. Irish born military officers assisted George Washington to win that war of independence and indeed they have fought in every war for America since then.

And this very house was designed by James Hoban from Kilkenny modelled in part on Leinster House in Dublin where the Irish Parliament has met on our own independence since 1922. It’s fitting that we gather here each year to celebrate St. Patrick and his legacy, he too of course was an immigrant. Although he is of course the patron saint of Ireland for many people around the globe, he is also the symbol of, indeed the patron of immigrants. Here in America, your great country, 35 million people claim Irish heritage, and the Irish have contributed to the economic, social, political, and cultural life of this great country over the last two hundred years. Ireland came to America because deprived of liberty, deprived of opportunity, of safety, of even food itself the Irish believed and, four decades before lady liberty lifted her lamp, we were the wretched refuse on the teaming shore. We believed in the shelter of America, in the compassion of America, in the opportunity of America, we came and we became Americans. We lived the words of John F. Kennedy long before he uttered them, we asked not what America could do for us, but what we could do for America, and we still do.

We want to give and not to take, we know that the Irish built the bridges and the roads, protected the public as firefighters and police officers, we’ve cared for the sick in hospitals, entertained as poets, as singers, as writers, as politicians, as judges and as legislators. And as entrepreneurs they provided hundreds of thousands of jobs for Americans, including most recently in exciting technology companies. Two-way trade in goods is approaching 100 billion dollars a year at the moment. Irish firms employ 100 thousand people across fifty states in the U.S. and we want to build on this for the future.

I wish you and the American people every success and happiness in the future. To Irish-Americans coast to coast, I say in these days especially, we hold you in our hearts, and tonight I thank you again for your warm hospitality. Mr. President, Mr. Vice President, may I wish you and your lovely families every good wish and blessing on this very special day.

Indeed I am reminded in many ways of the dream of another American president, which Ireland will work with you when he spoke the words and said, “my dream is at a place and a time where American will once again be seen as the last best hope of earth” spoken by Abraham Lincoln.

Mr President, Ireland will help you build on that foundation to achieve the ultimate dream, thank you sir and God bless you. 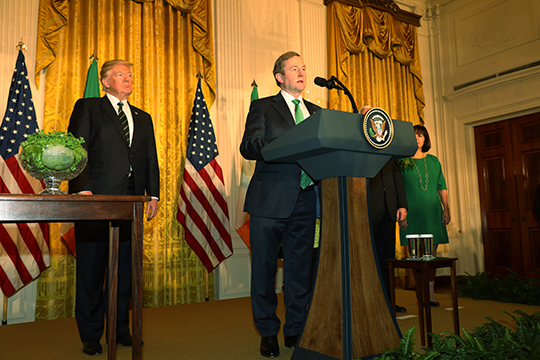