Transforming Our World: the 2030 Agenda for Sustainable Development

On August 2, 2015, the entire UN membership agreed upon a new agenda for Sustainable Development, with the integration of the economic, social and environmental dimensions of sustainable development at its core. The agreement sets the course for the entire world to deliver a more sustainable, prosperous and peaceful future for all, in harmony with our planet; and is due to be adopted by world leaders at the UN Summit in September. 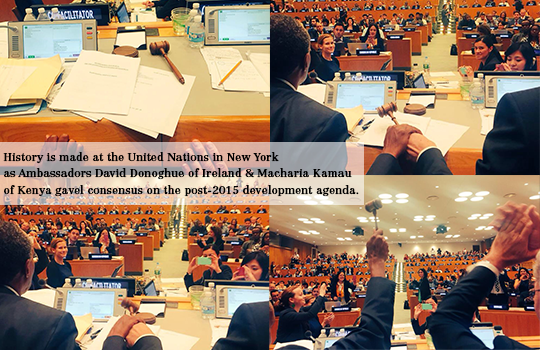 The new agreement is called “Transforming Our World:  the 2030 Agenda for Sustainable Development”.   It consists of 17 goals and 169 targets;   an accompanying Declaration (see the preamble below); a section on the means, financial and otherwise, which will be required for achievement of the new goals and targets over the next fifteen years;  and a section on arrangements for monitoring and reviewing progress. The ‘five Ps’ identified in the preamble —people, planet, prosperity, peace, and partnership—capture the broad scope of the agenda.

These goals take forward the unfinished work of the Millennium Development Goals and place a renewed focus upon the eradication of poverty. They differ from the MDGs in several key ways however. Firstly, a crucial aspect of the new agenda is that it is a universal one. All goals are equally applicable to Ireland as to any other country. A further element is a commitment to “leave no one behind” and to address those in most need as a first priority.

Additionally, the SDGs address a much broader and more holistic range of issues than the MDGs, incorporating issues such as inequality, sustainable cities, renewable energy, peaceful and inclusive societies and sustainable consumption and production, among others.

Ireland, through our Permanent Representative to the United Nations, David Donoghue, and our Mission to the UN, have had a central role in the process as co-facilitators of the negotiations together with Kenya.

The significance of the agreement is immense.  In its declaration, the agreement places the scale of ambition in the same context as that taken seventy years ago to create the United Nations from the ashes of war and division.

The next steps will be important and the agreement reached, taken alongside the recent agreement on financing for development in Addis Ababa and the forthcoming climate change conference in Paris, represent a transformative phase in global politics this year that gives us the opportunity to deliver the future we want.

At the Rio+20 Conference of 2012, Member States agreed to launch a process to develop a set of Sustainable Development Goals (SDGs), which will build upon the MDGs. A series of informal intergovernmental negotiations on the 2030 Agenda for Sustainable Development took place throughout 2015 at the UN, with each session focussing on a different element of the outcome document. These negotiations were the most open and inclusive to ever take place in a UN context, with civil society organisations, the private sector, academia and other stakeholders welcome, included and consulted at every stage of the process.

The Agenda also took into account other inputs and processes, including the Report of the Open Working Group on Sustainable Development Goals which was agreed following 18 months of inclusive inter-governmental negotiations and served as the main basis for negotiations; and “The Road to Dignity by 2030” the synthesis report of the UN Secretary General.

In October 2014, Mr Sam Kutesa, President of the UN General Assembly, announced the appointment of the Permanent Representatives of Ireland and Kenya to the UN to facilitate the international negotiations on the Post-2015 Development Agenda. In this role, Ireland, with Kenya, led the successful negotiations which culminated in an ambitious outcome document that will be central to global efforts to sustainably transform our world and to eradicate extreme poverty everywhere by 2030.

As co-facilitators of the process, Ireland and Kenya were tasked with bringing together all UN member states, civil society, the private sector and others with a view to negotiating an ambitious and transformative Post-2015 Development Agenda. More information on the inter-governmental negotiations is available from the UN's Sustainable Development Platform.

Ireland’s successful role in driving this agreement marks a very real commitment to the UN and is a tremendous way to mark both the 70th anniversary of the United Nations and the 60th anniversary of Ireland’s membership of the organisation.

In September, heads of state and government from all over the world, including Ireland, will gather to formally adopt the outcome document.

Each Goal is accompanied by a number of specific targets which must be met if the SDGs are to be achieved, 169 targets in total. Many of the targets will ultimately have to be adapted to the specific country context, and will be further elaborated through the identification of indicators at the global and national level to assist in tracking progress over the lifetime of the Agenda. The indicators will be identified at the global level in the coming year, led by the work of the Statistical Commission of the UN. National indicators will be developed at country level.

Governments have the primary responsibility for implementing the Agenda and for follow-up and review, at the national, regional and global levels. To support accountability to citizens, every government will need to provide for systematic follow-up and review of the goals, targets and indicators. The High Level Political Forum will have a central role in overseeing follow-up and review at the global level. The General Assembly, the Economic and Social Council and specialized agencies will also be engaged in reviewing progress in specific areas.

Not all countries have the same capacity to implement this agenda and for this reason, the international community and all stakeholders will need to work in collaborative partnership, unite around a revitalised Global Partnership for Sustainable Development and implement the Addis Ababa Action Agenda, the outcome document of the Third International Conference on Financing for Development, a dedicated strategy to support the mobilisation of finance and other resources.

The 2030 Agenda for Sustainable Development reflects the priorities of citizens around the world. It is a charter for people and planet in the twenty-first century. It is an Agenda of the people, by the people, and for the people, and its success can only be ensured if it is known and owned by all.

Read the full text of the Preamble: Preamble to 2030 Agenda for Sustainable Development