Our membership of the UN has been central to Ireland’s foreign policy since we joined in 1955. The principles and values enshrined in the UN Charter are those we have always striven to promote. 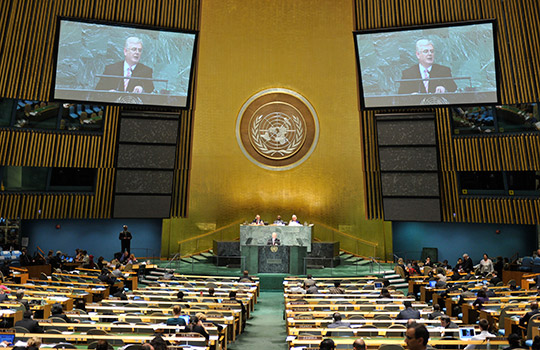 "The United Nations is the unique and indispensable forum where the peoples of the world share their collective concerns and determine to take action to make the world a better and a safer place”. Ireland’s Minister for Foreign Affairs (Eamon Gilmore), 28 September 2013, UN General Assembly New York.

Our membership of the United Nations has been central to Ireland’s foreign policy since we joined in 1955. The principles and values enshrined in the UN Charter are those we have always strived to promote and protect.

The principles and values enshrined in the UN Charter are common collective goals, and include:

We take seriously our obligations under the UN Charter and our foreign policy is framed with these obligations in mind. At the UN, Ireland seeks to translate the principles and values of the UN Charter into effective international action on a range of global challenges:

Ireland has earned considerable international respect through its active participation in the UN. Through our principled contribution on issues such as human rights, development, peacekeeping and disarmament, we have been able to achieve an impact which is disproportionate to our size. This adds real value and reach to the role played by Ireland in international relations and assists the Government in realising its key foreign policy objectives.

At the UN, Ireland also works to shape common EU positions and statements on a wide range of political, security, human rights, development and other issues.

The UN’s General Assembly opens in September each year with a plenary debate in which Foreign Ministers from most of the UN’s 193 members participate. The contribution made by Ireland’s Minister for Foreign Affairs is an opportunity for Ireland to indicate its approach to key global challenges over the coming year.

Ireland’s Permanent Mission in New York promotes Irish foreign policy interests and values at the United Nations. In addition, Ireland has permanent missions to the UN in Geneva and in Vienna.