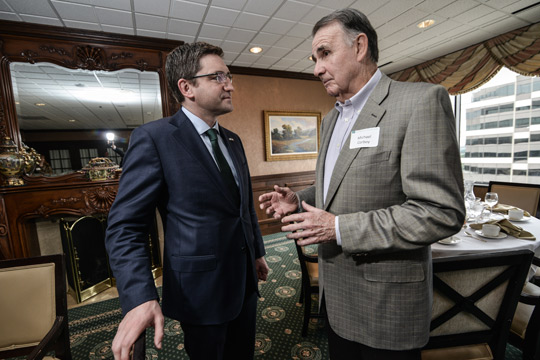 I met with friends and supporters of the American Ireland Fund (AIF) in Dallas at breakfast on 3 November and was grateful for the warm welcome. Guests attending included AIF National Board member Mike Corboy and Texas Regional Advisory Board members Davey Devlin and Kevin Hanrahan. In my remarks to attendees I highlighted the major role that the Irish and Irish American community has played in the development of Dallas and Texas. I also updated guests on the opening of the new Consulate and Ireland House in Austin, and highlighted how the Irish and Irish American community can work to support further strong business, investment and trade links between Ireland and Texas. Before concluding I also thanked the AIF and its supporters for its support for a range of charitable and education initiatives in Ireland.

I look forward to joining the AIF and its friends at the Texas Emerald Ball on February 28, 2015 (see http://www.theirelandfunds.org for information on this event).

Thank you to Honorary Consul John Kane (also an AIF National Board member) for his support for the Dallas breakfast.