For the first time, we are excited to share with you that Ireland Week will take place in Los Angeles from 16 – 21 October.

The purpose of Ireland week is to showcase Ireland’s modern culture and to connect Irish and American creative and business professionals. At the core of Ireland Week, there will be a two day conference, Connect 353, with multiple discussion panels. The panel discussions will be diverse covering a range of topics from the Irish music industry, to Irish animation and gaming. There will be discussions on bilateral Irish-US relations, as well as on the emerging tech industry in Ireland. The event will also promote networking and start-up pitching opportunities.

At the launch of Ireland Week on 13 July in Dublin, An Taoiseach, Leo Varadkar stated:

“There is significant potential for growing trade & economic links between Ireland and the Los Angeles region. This initiative should help our agencies to promote Ireland as an attractive location for trade and investment. The strong focus throughout the programme on culture and tourism is particularly welcome given that Ireland and LA are now benefitting from increased direct connectivity.”

Throughout the week there will be a variety of cultural events to promote the Irish food and entertainment industry, which currently supports over 78,000 jobs in Ireland. Ireland Week has said that with direct connectivity between Los Angeles and Dublin, “we aim to capitalise by making this event a two way international superhighway. Ireland displays its talents abroad while encouraging inward investment, tourism, jobs and cultural awareness.” 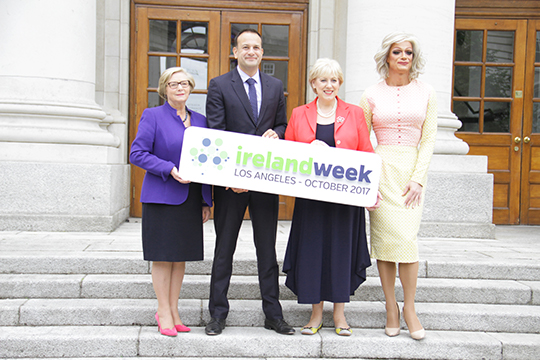 Among the many organisations involved include the Department of Foreign Affairs and Trade (and especially, of course, the Consulate of Ireland based in San Francisco; The Irish Film Board, Culture Ireland, Creative Ireland, IDA Ireland, Tourism Ireland, Enterprise Ireland, Music from Ireland, Bord Bia, and the American Chamber of Commerce Ireland. We also look forward to working closely with the California Irish Legislative Caucus.

Keep up to date on developments with irelandweek.com and plan to come join us in mid-October in LA!