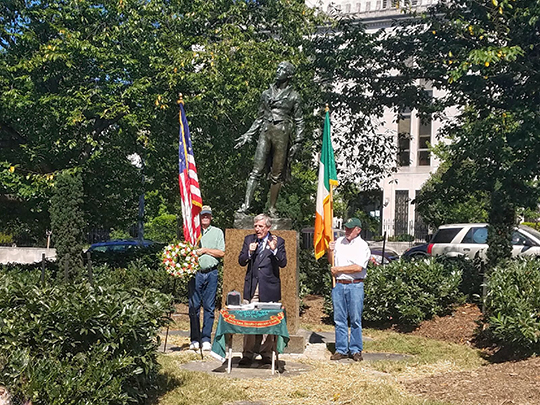 Let me take you back to New York on 28th of February 1904 when, before an enthusiastic audience of 4,000 at the City's Academy of Music, the leading Irish poet, WB Yeats delivered a speech on Robert Emmet: Apostle of Liberty. The event was organised by the leading Irish-American body, Clan na Gael, which was led by John Devoy.

WB Yeats, was born 62 years after the death of Robert Emmett.  He came from what would then have been called an Anglo-Irish background. Yeats's mother was a member of a prominent Sligo business family while his father, John B., son of a Church of Ireland clergyman, was a talented but commercially unsuccessful painter who spent the last 14 years of his life in New York where he died in 1922.

WB was drawn into nationalist politics under the influence of the old Fenian John O'Leary, who had returned to Ireland from imprisonment and exile in the 1880s, and by Maud Gonne, who inspired so many of his best-known poems. O’Leary convinced Yeats to look to Ireland as a source of inspiration for his writing. Yeats accepted O’Leary’s advice and spent the 1890s vigorously making the case for an Irish national literature in the English language.

In the winter of 1903-04, he paid his first visit to the United States where he embarked on a four-month lecture tour which took him to quite a few US cities including Washington where he met President Theodore Roosevelt, who was an admirer of Irish literature.

Yeats, although he appears to have taken the IRB oath, was involved in the 1798 centenary commemoration and, like most advanced Irish nationalists, adopted a pro-Boer stance during the South African war of 1899-1902, was never a conventional nationalist figure. Indeed, the time of his 1903/04 visit to the US, he was beginning to feel quite disenchanted with Irish politics. Being in America among Irish Americans seems to have brought his patriotic fervour back to the fore and his Emmet speech is about as nationalistic as anything Yeats ever said or wrote.  It reads like a counterpart to his famous patriotic play, Kathleen ní Houlihan, which had premiered in Dublin in 1902 and had electrified many in nationalist Ireland.

Yeats's speech was based on earlier, romanticised accounts of Emmet's life and is worth recalling for what it says about Emmet and the image he enjoyed especially in America 100 years after his death. Yeats started by noting that 'no two countries are bound more closely together than Ireland and America', a statement that retains its validity in 2017. He pointed to the importance of America and Irish Americans as a source of inspiration for Ireland, going back to the time of the American War of Independence which exerted an influence on the United Irishmen and their Rising of 1798.

Turning to Emmet, Yeats maintained that, in the wake of the suppression of the 1798 Rising and the Act of Union, Emmet's actions had shown 'that there was something in Ireland which not all the wealth of the world could purchase.' Such idealistic qualities had, he said, caused Ireland to place Emmet 'foremost among her saints of nationality.'

Yeats made lofty claims for Emmet's character and talents. 'His mind’, he said, ‘was fed from the pure fountain of classic literature'. He quotes the poet Thomas Moore's assessment of Emmet: that 'among all I have ever known who appear to me to contain in the greatest degree pure moral worth and intellectual power, I should among the highest of the few place Robert Emmet'. Yeats praised the manner in which Emmet accepted his death  sentence:- 'all the time his mind is as athletic, is as clear as if he were sitting quietly in his study.'

Yeats argued that Emmet's ideal had 'arisen incorruptible'. His death had 'changed the whole temper of the Irish nation' because in Ireland 'we sing the men who fell nobly and made an idea mighty'. Forty years after his death, his memory became one of the principal inspirations for the Young Ireland movement. He also recalls that Emmet's picture hung in thousands of Irish cottages alongside images of St. Patrick and the Virgin Mary. Yeats could not have known this at the time, but Emmet was later to become an inspiration for Patrick Pearse and thus the Easter Rising of 1916.

Yeats maintained that the Ireland of his time, dominated politically by the Home Rule Party of Parnell and Redmond, might in pursuit of its goals have neglected 'the more eternal and ideal elements of nationality'. He thought that the movements which flourished in early 20th century Ireland - the Gaelic League and the literary movement in which he was a leading figure - could help recapture some of the idealistic spirit that had animated Robert Emmet. While Emmet, in Yeats’s view, may have been unsuccessful in what he tried to accomplish, he had nonetheless given Ireland her patriots.

Yeats argued that the Irish Ireland movement of the late-19th century had made 'Irish intellect occupy itself with Ireland' and had inspired an 'intellectual wakening' of the Irish people. In a rousing conclusion, he predicted that the great Empires would eventually fall silent but that 'the pipe that is called Ireland will once more begin to sound and that its music will fill the world.'

I am delighted to be here this morning as we remember the life of Robert Emmet. Lots of things have changed since Emmet's day and since Yeats spoke in New York 100 years after his death. The United States, a fledgling nation in Emmet's day with a population about the same as Ireland’s, has become the world's most powerful country while Ireland has taken its place among the nations of the Earth. We retain, of course, a continuing aspiration to Irish unity by consent to be achieved by exclusively peaceful and democratic means. That ambition is enshrined in our Constitution and is provided for in the Good Friday Agreement.

As a historian and a diplomat, I retain a fascination with, and admiration for, all of those who struggled to assert Ireland’s separate identity over the centuries. Ireland’s struggle did not end with independence in 1922. At that time, we were faced with the immense challenge of making a reality of independence in the difficult circumstances of those times and in the face of subsequent economic depression and a further World War. In recent decades, Ireland has come into its own in economic terms, and as a member of the European Union. The Good Friday Agreement provides a framework for peace in Northern Ireland and for a better future for all who share the island of Ireland.

There is currently a political impasse in Belfast and the Irish Government is completely committed to restoring the power-sharing Executive so that Northern Ireland can continue its journey towards reconciliation and face up to the challenges of Brexit. As in the past, we will look to our friends in the United States to provide the kind of support and encouragement that has been so crucial to us in decades gone by.

One of the lessons I draw from looking at Yeats's tribute to Emmet is the extent to which Irish America helped keep alight the flame of Irish independence at a time when many in Ireland might have been willing to accept some lesser form of autonomy had it been available. From last year's 1916 Centenary Commemoration we came to realise just how important a role the Irish in America played at that time. I take the view that all who strove in Ireland's cause throughout our troubled 19th century deserve our respect - the parliamentarians who represented Ireland at Westminster throughout the 19th century as well as those like Emmet who took a different path. They all had Ireland’s interests at heart and all received support and encouragement from Irish America. In our time, we, of course, possess democratic instruments and traditions that that were not available in Emmet's time.

To return to WB Yeats, in the decade after his 1904 speech in New York his disenchantment with Ireland deepened. In his poem, ‘September 1913’, he announced the demise of the 'romantic Ireland' he had envisioned in his younger days:

It's with O'Leary in the grave.

But even in the depths of his frustration with Ireland, Yeats continued to view Robert Emmet as the epitome of romantic idealism.

Was it for this the Wild Geese spread

The grey wing upon every tide;

For this Edward Fitzgerald died,

And Robert Emmet and Wolfe Tone,

All that delirium of the brave?

More than 200 years after his death, I am satisfied that Robert Emmet would be astonished by the progress Ireland has made: an independent sovereign state and involved in a unique partnership with its European neighbours committed to advancing our shared values and interests.  He would, I think, be happy to have his epitaph written but like all Irish people today would want our country to continue to move forward in meeting the challenges that now confront us. With the support of our Irish family around the world, we can face the future with confidence.

Thank you for your attention. 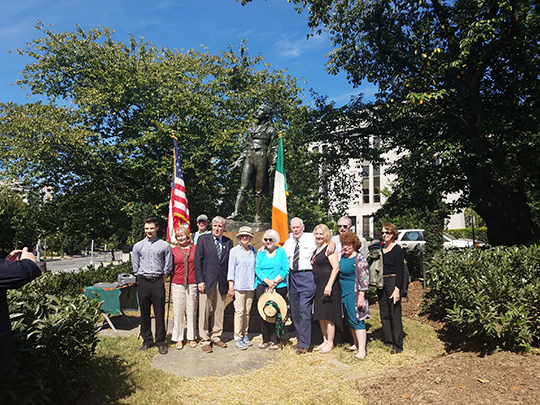