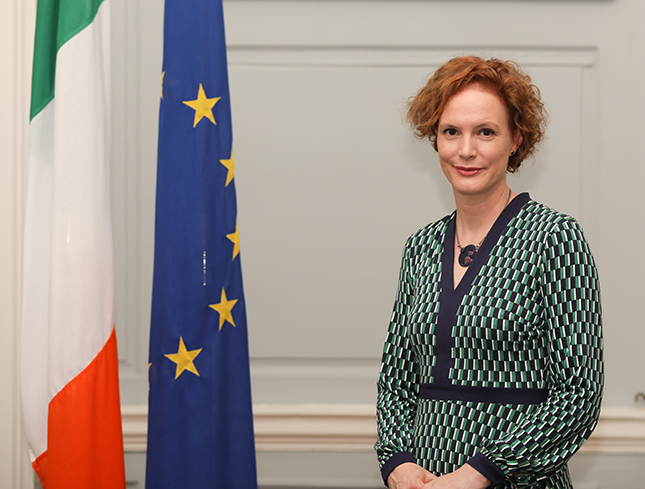 Welcome to the website of the Consulate General of Ireland to the North of England, based in Manchester. We are proud to represent Ireland in the English regions of the North West, North East, and Yorkshire and the Humber.

The opening of a Consulate General in Manchester is a concrete example of the Irish Government’s enduring commitment to the British–Irish relationship, and to the Irish community in Britain, and Irish businesses operating here.

We work closely with the Embassy of Ireland in London, where Ambassador Adrian O’Neill leads efforts to promote and protect Ireland’s interests in Great Britain. As the Consulate gets established, consular services, such as passports, visas, and emergency assistance, will continue to be provided by the Embassy in London.

We also work closely with the State Agencies, including Enterprise Ireland with which we share an office, as part of Team Ireland’s collective work to advance Ireland’s commercial and promotional interests in the North of England.

Ties between Ireland and the North of England are exceptionally deep, based on history, economic, and cultural relationships. The North of England is also home to over 135,000 people who were born on the island of Ireland, and many thousands more who claim Irish descent.

Through the Emigrant Support Programme, the Irish Government already supports nearly 30 Irish community organisations across the region. We look forward to building on these existing relationships and engaging with the dozens of Irish heritage and culture bodies in the North of England, supporting community and cultural activities.

We hope the Consulate General will do much to enrich and strengthen the relationship between Ireland and the North of England in the years to come.

Sarah Mangan is Ireland’s first Consul General to the North of England.

A career diplomat with over 21 years of experience with the Irish Foreign Service, Sarah has served in a number of roles since joining the Department of Foreign Affairs in 1999. Overseas, she has served as Deputy Head of Mission at Ireland’s Embassy to Australia, and at the Embassy of Ireland in Mexico; First Secretary at the Permanent Mission of Ireland to the United Nations in Geneva; and as Third Secretary at the Embassy of Ireland, New Delhi, India.

Sarah completed her undergraduate degree in English Literature and Geography at University College Dublin, going on to train as a secondary school teacher and completing a Higher Diploma in Education from NUI Maynooth, prior to joining the civil service.

Sarah is married to Hari Gupta and they have three children.