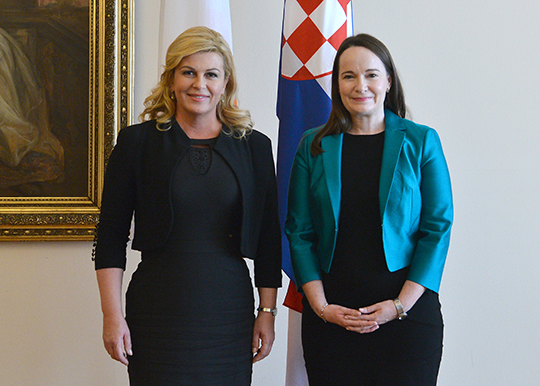 Ireland’s new Ambassador to Croatia, Olive Hempenstall, had the honour of presenting credentials to the President of the Repubic of Croatia, Kolinda Grabar-Kitarović, on 27 September. Ambassador Hempenstall was accompanied by her husband, Seamus Hempenstall.

The President and the Ambassador had warm discussions on the bilateral relationship, including current EU issues, the trade and economic relations between our two countries and the affinity that exists between our two peoples.

Ambassador Hempenstall is the second resident Irish Ambassador to the Republic of Croatia. The first, Ambassador Tim Harrington, left Croatia for the People’s Republic of China in the summer of 2016.