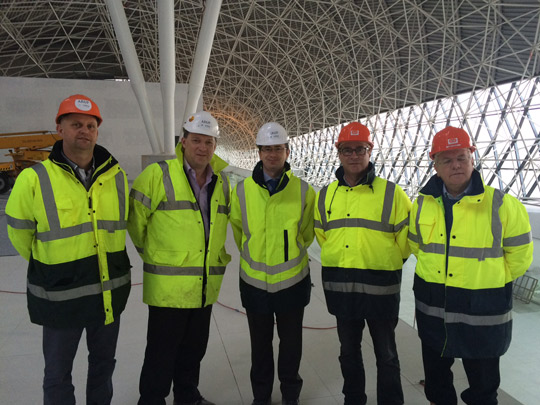 On Tuesday 1 March, Ambassador Tim Harrington toured the construction site of the new Zagreb airport terminal. The €243m terminal is being built by a consortium led by Bouygues Construction International. Arup Ireland, part of the global Arup Group, is acting as an Independent Engineer on the project and is also supplying the Supervising Engineering services. This is the first major project for Arup Ireland in Croatia.

The airport terminal project is at an advanced stage and is due to be completed later this year. It will initially have the capacity for a throughput of 4.5 million passengers per annum but it can scale up to accommodate 8 million passengers if needed.

Ambassador Harrington said that he was very pleased to see the contribution of Arup Ireland to the project and that it would serve as a platform to create further opportunities for the company in Croatia. He added that the completed terminal, which will be named after Croatia's first and late president Franjo Tuđman, will be a major addition to Croatia’s infrastructure.