Ambassador Tim Harrington met with the new President of the Croatian Sabor (Parliament). 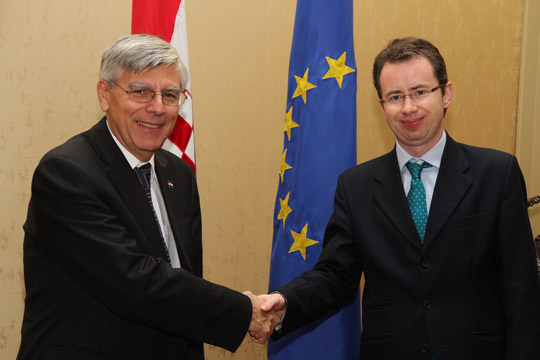 Ambassador Harrington congratulated Dr. Reiner on his election to the post of President of the Sabor in December 2015 and wished him every success in this role.

There was a very good exchange of views on strengthening and deepening inter-parliamentary relations between Croatia and Ireland. Ambassador Harrington complimented the work of the Croatian-Irish Inter-Parliamentary Friendship Group of the Sabor in advancing an understanding of Ireland in Croatia. He also remarked on the excellent relations he enjoyed with the Friendship Group and that he hoped to enjoy similar strong ties with the Friendship Group to be constituted in the recently elected Sabor. Ambassador Harrington hoped for an early opportunity to address the Group.

Both Ambassador Harrington and President Reiner also remarked on the increasing personal connections between Ireland and Croatia. Many Croatians have moved to Ireland since Croatia's accession to the EU in the summer of 2013. The Ambassador noted that the Irish Diaspora have been an important source of support for Ireland, especially for helping to win inward investment.

There was a useful exchange of views on the economic and political situations in both countries. The Ambassador agreed on the need to further improve economic relations and trade.