Ambassador Harrington discussed joint initiatives with the City of Zagreb. 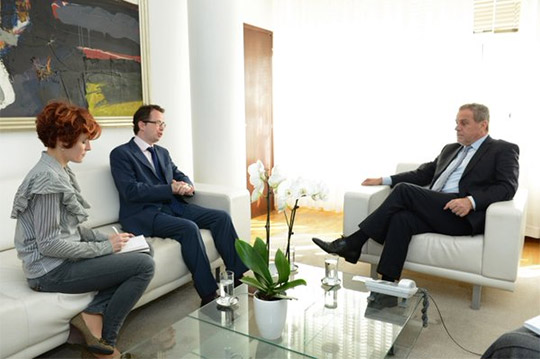 On Thursday 31 March, Ambassador Tim Harrington met with the Mayor of Zagreb, Mr. Milan Bandić, to discuss co-operation between the City and the Embassy. The Ambassador and the Mayor discussed ideas for cultural co-operation, trade and economic links. They also discussed ways in which the Embassy could help the City of Zagreb to co-operate better with cities in Ireland, most notably with Dublin.

The Embassy has planned a number of activities this year in the Croatian capital, including the upcoming Zagreb Book Festival, which will take place between 16-22 May. A number of Irish authors will be in Zagreb for the event.

Co-operation with the City of Zagreb will ensure that this and other initiatives are successful.