Cooperation between the City of Rijeka and the Irish Embassy 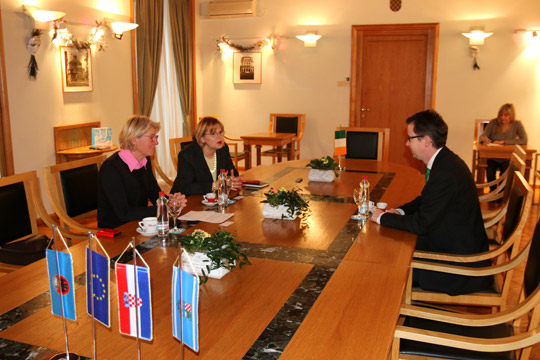 Ambassador Harrington discussed the potential for co-operation between Ireland and Rijeka. One important avenue of potential co-operation is in regard to the European City of Culture 2020. The port City of Rijeka is one of the Croatian contenders (along with Osijek, Dubrovnik and Pula) for European City of Culture in 2020 (to be shared with an Irish city – Galway, Limerick and bid from the South-East led by Waterford).

The Ambassador and the Council President also noted the historical connections between Rijeka and Ireland in the person of Laval Nugent, an Irishman, born in Co. Westmeath in 1777 who joined the Austro-Hungarian army and rose to the rank of Field Marshall. He became the military Governor of Croatia and had as his seat, Trsat Castle, which overlooks Rijeka.

They also noted the sizeable number of Irish tourists who come to Croatia every year – many to neighbouring Istria. This Summer, the European University Games, 2016 will be held in Zagreb and Rijeka (water-based sports) and will see a presence from a number of Irish Universities.