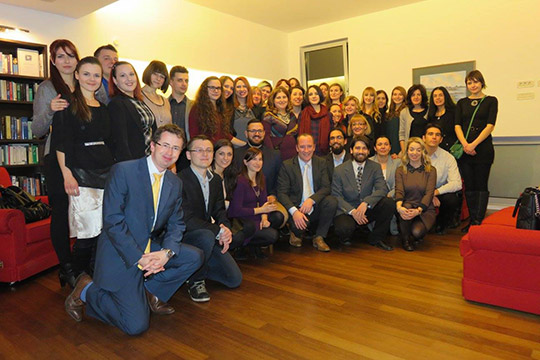 A little more than 10 years ago, Paul O'Grady - an Irishman living in Pula - decided to sow some Irish culture in Croatia. With the help of a few Croatian enthusiasts, Paul set-up the first Irish set dance school and dance troupe in the country, "Irish Maiden". The groups has grown over time and has more than 500 members since its creation, with groups in Zagreb, Rijeka and Pula.

For their 10th anniversary celebration, on the evening of Wednesday 20 January , Ambassador Tim Harrington, hosted a reception in the Irish Residence.

Ambassador Harrington noted the fantastic contribution that Irish Maiden had made in showcasing Irish culture and dance in Croatia. He also pointed out the similarities of the Irish and Croatian people and the importance of culture in bringing the two groups together. The Ambassador also presented Paul O'Grady with the book "Ceol & Solas" ("Music and Light"), a book of photography on Irish traditional music by Tony Kearns, as a mark of recognition for his efforts in promoting Irish culture and in improving the Irish-Croatian relationship.

Irish Maiden performs at numerous events in Croatia every year and they have a strong following in the country. Their most recent performance was at Zagreb's Advent festival, before Christmas 2015. The group was recently featured in one of Croatia's main daily newspapers and on national television.

In the beginning of January 2016, Irish Maiden started its new dance season in Pula, Rijeka and Zagreb. The interest in Irish dancing is apparently growing faster than ever!

"We had four new members in Pula, four in Rijeka and 20 in Zagreb" said O'Grady, who was obviously thrilled with the interest. He added: "The Embassy's support has been an important part of that success."

As a result of O'Grady's efforts with Irish Maiden, there are now other Irish dance troupes in Croatia.

Ana Kušec and Marija Čorak, both former members of Irish Maiden who joined the Embassy for the 10th anniversary of celebration, now have their own dance troupe called Celtic Fantasy. This step dance troupe recently appeared on a prime time, Saturday night TV show on the Croatian national broadcaster. 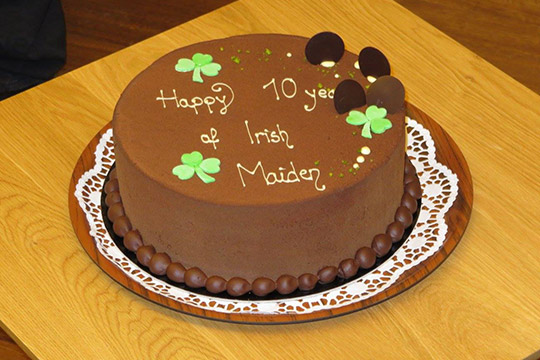