Ambassador Tim Harrington took part in a roundtable at this year's Whiskey Fair. 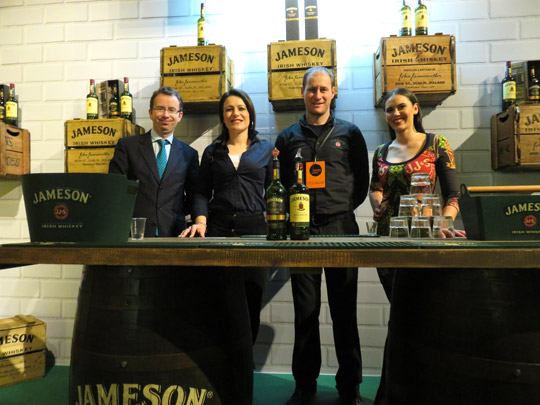 Ambassador Tim Harrington and his colleagues from the British and Canadian embassies, Ambassador Ian Cliff and Ambassador Dan Maksymiuk, respectively, took part in a roundtable discussion about "country trademarking" at the second annual Whiskey Fair. The discussion was the "kick-off" event for this year's Fair which took part on 26-27 February at Zagreb's Hypo Event Centar.

Each of the ambassadors talked about the history and the culture of whiskey in their own countries and pointed out just how important the export of whiskey is to the economies of the three countries.

Ambassador Harrington was very pleased to have the opportunity to attend the annual Zagreb Whiskey Fair, describing himself as delighted to take any opportunity to talk about Irish whiskey’s great success story. The Ambassador said that Irish whiskey industry is a fast growing sector of the economy employing 800 people directly and an estimated 4,200 indirectly. He also noted that Irish whiskey is one of Ireland's fastest growing export sectors. Exports were worth about €350 million in 2013. Over the past 10 years, Irish whiskey exports have grown by almost €215 million with average annual growth rates of over 12%.

Ireland is hugely proud of the success of Irish whiskey in becoming a becoming a well-loved product all over the world.

Jameson Irish Whiskey was represented at the Whiskey Fair. It is the most well-known Irish whiskey in Croatia, but the organizers of the event would like to see more Irish distillers represented in Croatia in the years to come.

The whiskey market is still relatively small in Croatia, but events such as the Whiskey Fair will help to improve its share of the market.

Visit our Facebook page for more information on the Embassy of Ireland, Croatia