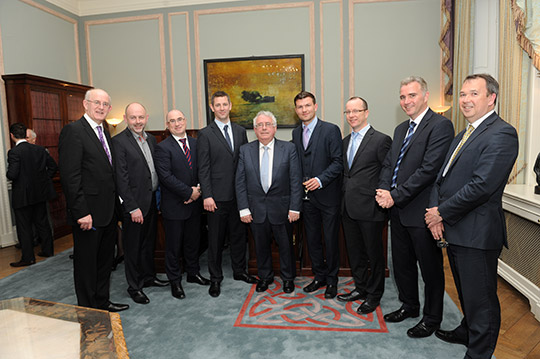 The Minister for Trade and Development, Joe Costello TD, promoted the Irish aviation industry to senior UK buyers and influencers at a business event here at the Embassy of Ireland.

“Ireland has a long tradition in aviation and aerospace. The Irish aviation and airline industry accounts for approximately 3% of GDP and contributes €5 billion to the Irish economy. The industry employs over 18,000 people in Ireland and is one of our most successful internationally-traded sectors.

“The industry in Ireland is continually evolving and consists of the full range of aviation supports: aircraft management, airline call centres, financial services and support, and security and software communication technologies. It also includes the development of software and telecommunications for space contracts. The event is a great example of the support which Ireland’s State agencies and our Embassy network provide to Irish companies. I am delighted to be able to support Irish businesses looking to expand in this highly competitive market.”

“The ground-breaking visits of Queen Elizabeth II to Ireland in 2011 and the visit of President Michael D. Higgins to Britain last month reflect the fact that the relationship between Ireland and Britain is now better than it has been at any time in history. An important example of this cooperation took place last February when the Ireland and UK ran their first ever joint trade mission to the Singapore Airshow.”

The event was organised by Enterprise Ireland to showcase Irish aviation capabilities, consolidate business relationships with existing customers and prospects, and initiate new relationships with potential future business partners. Seven Irish companies, involved in maintenance, repair and overhaul, participated in tonight’s event alongside their invited guests. These companies employ a total of 1,420 people and had a turnover of over €232m in 2013, of which more than €21m was exported to the UK market.