President Higgins made a two-day visit to Wales on Monday 27th and Tuesday 28th October. His visit included meetings with members of the Welsh Assembly and from the educational and cultural world in Wales. His visit also honoured the centenary of the birth of Dylan Thomas, which is being celebrated this year. 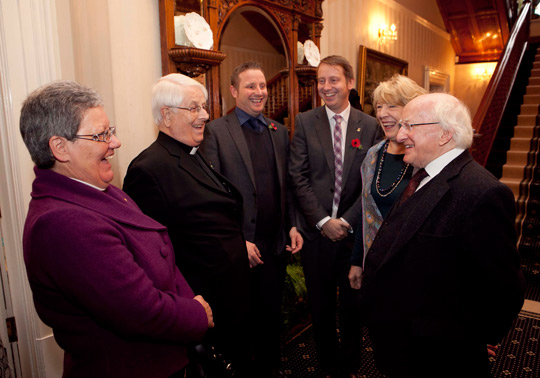 This is the President’s seventh visit to Britain, and his first to Wales, since taking office.

On arrival in Cardiff on Monday 27th, the President was greeted by Dr. Peter Beck, Lord Lieutenant of South Glamorgan and Ireland’s Ambassador to Britain, Mr. Dan Mulhall. He then visited the Mansion House in Cardiff, where he attended a lunch hosted by Cllr. Phil Bale, Leader of Cardiff Council.

The President visited Ty Hywel, for a meeting with the Rt. Hon Carwyn Jones, First Minister of Wales. After the meeting the President visited the Senedd (National Assembly for Wales), where he met with David Melding, Deputy Presiding Officer and other Assembly Members, from all political parties represented at the Assembly.

The President and Sabina Higgins attended the Grand Theatre, for the final session of the ‘Dylathon’, celebrating 100 years since the birth of Dylan Thomas. There, they met Michael Bogdanov, Director of the special ‘Dylathon’ and Sir Ian McKellen. As part of the ‘Dyathlon’ the President read from ‘Elegy’ an unfinished poem by Dylan Thomas.

On Tuesday 28th the President and Sabina visited Swansea University, to hear about the projects of the Ireland Wales Programme and the President delivered a speech.

Later, the President and Sabina Higgins attended an Irish community reception at Awen Penderyn Foyer (The Wales Millennium Centre), hosted by the Irish Ambassador. The event celebrated the economic, political, cultural and community links between Ireland and Wales - and provide an opportunity for the President to meet and address the Irish community in Wales.