Embassy marks the significance of the Battle of the Somme

As part of Ireland’s 2016 Programme of commemorations, the Ambassador of Ireland Dan Mulhall hosted an event to mark the significance of the Battle of the Somme at the Embassy of Ireland London on 14th June 2016. 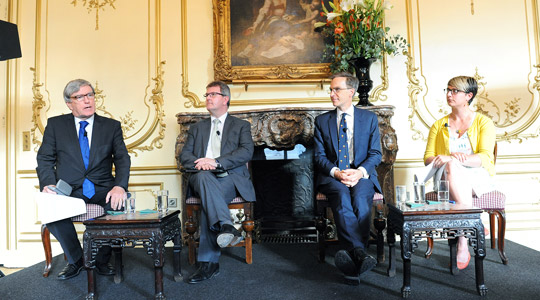 Speakers at the Embassy event included Sir Jeffrey Donaldson MP, the DUP’s parliamentary chief whip and defence and business spokesperson in the House of Commons and Chair of the Northern Ireland Coordinating Committee for the Centenary Commemoration of WW1; Dr Andrew Murrison MP, Prime Minister Cameron’s Special Representative for the Centenary Commemoration of the First World War and former Parliamentary Under-Secretary at the Northern Ireland Office; and Dr Catriona Pennell, historian of 19th and 20th century British and Irish history, based at the University of Exeter.

The event is part of a series of events being organised by the Embassy in London throughout 2016 to commemorate the historical events of 1916.

“I am pleased to host this event to reflect on the Battle of the Somme and to explore its significance in shaping the history of the island of Ireland over the past 100 years. As we commemorate the events of 1916 in Ireland and in the UK, I believe events like this provide an opportunity to explore our complex, sometimes shared and sometimes contested histories, to remember the past in an inclusive manner, and to reflect on and advance further the productive journey of reconciliation on which Ireland and Britain have been embarked for decades now.”

"I am delighted to take part in this centenary event hosted by the Irish Embassy and focused on the Battle of the Somme. The Somme is part of our shared history and the fact is that both unionists and nationalists, Protestants and Catholics from all over the island of Ireland fought and died in this cataclysmic encounter. The Ambassador is to be commended for facilitating this reflective event and such discussions can only enhance our approach to remembrance and reconciliation."

"The Somme offensive was a pivotal moment in the Great War and central to the British and Irish public's perception of it. It is right that we should reflect on the losses at that time and what they mean for us today."

'I am delighted to be involved in tonight's event at the Irish Embassy discussing the significance of the Battle of the Somme. As a British citizen whose research career into the First World War started at Trinity College Dublin and has continued utilising archives such as the Somme Museum in Newtownards, I think it is testament to how far Irish commemorative culture has come that the Somme is now a key part of the 2016 calendar alongside other cornerstone events such as the Easter Rising.'

You can listen to the podcast here and the event is also being recorded for broadcast on BBC Parliament.