Minister Flanagan wraps up the Ireland 2016 commemorations programme at the Embassy of Ireland, London, 7 December 2016

On Wednesday 7 December Ambassador Mulhall welcomed the Minister for Foreign Affairs and Trade, Charlie Flanagan, to the Embassy of Ireland, London, to mark the end of the Ireland 2016 commemorations programme for Ireland and the Irish in Britain.

Minister Flanagan's remarks on the commemorative year are below. 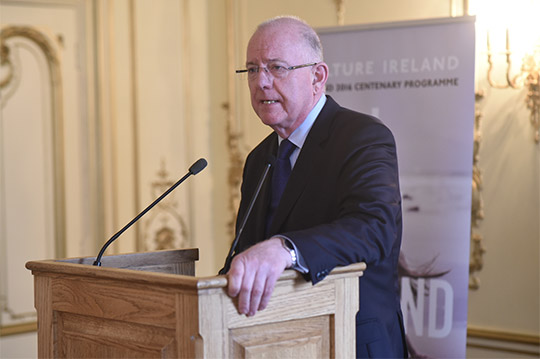 “Ambassador, Ladies and Gentlemen,
Thank you all for coming today to mark the end of a momentous year of commemoration for Ireland and the Irish in Britain. I would like to take this opportunity to extend my sincere gratitude and congratulations to all who contributed to the success of this Commemorations programme.

Our approach to Ireland 2016, and to the Decade of Centenaries, has always been guided by the principle that all commemorative activity should be inclusive, appropriate and respectful.

This year has witnessed a sea change in how we, as Irish people, understand and engage with our country's history. Not only did this wide-ranging programme offer Irish people the chance to explore an important milestone in our island’s story, it also provided an opportunity for people in Britain to encounter this key moment in Irish and indeed British and European history.

I am struck by the creativity and the variety of ways in which the events of 1916 were remembered around the world. Here in Britain, there was a rich and diverse programme of commemorative events, reflecting the complex interactions between the histories of our neighbouring islands.

I know there were some particularly special occasions during the year. I have heard much praise for the landmark week-long festival hosted by the Wigmore Hall which recognised Ireland’s reputation for cultural excellence in the classical music sphere with performances by some of our leading Irish sopranos and tenors.

In April, the Embassy and Culture Ireland together with the National Concert Hall brought a showcase event to the Southbank Centre. ‘Imagining Ireland’ celebrated Ireland’s musical journey over the last 100 years and the rich interplay of the musical life of Ireland and Britain. It featured stellar performances from some of Ireland’s best musicians in the presence of President Michael D. Higgins.

I want to applaud too Comhaltas Ceoltóirí Éireann for their Macalla concert in the Barbican and the Irish World Heritage Centre for hosting the prestigious Hallé orchestra at an outdoor Concert of Commemoration.
The exhibition of photographs from the Sexton collection on display at the Photographers’ Gallery provided an excellent opportunity to view the period, literally through another lens.

Other highlights included a Digitisation Project/Open Day where more than 200 people visited the Embassy with memorabilia relating to 1916 which now is available to a wider audience through the Inspiring Ireland website.

The wide ranging debate on the complexity of Irish history has been a welcome feature of the year. In case any of you missed the Embassy lecture series on all aspects of 1916, including both the Easter Rising and the Somme, I am reliably informed that the podcasts are still available on the Embassy’s website so it is not too late to enjoy these while still in the centenary year. The engagement from the academic community has been impressive. Leading academic institutions and centres of Irish studies across the UK organised conferences and talks to examine the seminal events of 1916, with events in the Bodleian Libraries in Oxford, the University of Cambridge, the University of Liverpool, St. Mary’s University and others.

I want to also acknowledge the important role played by the Liverpool Easter 1916 Commemoration Committee in highlighting and remembering the role of Liverpool Irish men and women in the Easter Rising. It is their efforts, and the efforts of so many communities across Ireland, Britain and the wider world, which have made this year a success. I know many of you here this evening played a crucial role in this regard and have organised a range of events, from concerts to plays and exhibitions to art installations, to reach and involve tens of thousands of people. I am really pleased to have this opportunity, on behalf of the Irish Government, to thank you for your work and initiatives this year.

As this year concludes, we can, I believe, look back with a sense of pride on the series of commemorative events that took place in Ireland and around the world. It would be remiss of me not to pay tribute to Ambassador Mulhall and his excellent team here in the Embassy who have worked so hard throughout this year on the events I mentioned before and many others besides.

As Minister for Foreign Affairs and Trade, it has been a particularly memorable year and I want to highlight several commemorative events which meant a lot to me personally.

This time last year, I had the pleasure of launching the Embassy’s Programme for 2016. Standing at this lectern, I expressed a wish that at the end of 2016, we would be able to look back on a programme that served to deepen understanding and mutual respect between our two countries and peoples. At home and abroad, the commemorative programmes to mark the Rising and the Somme, have helped achieve this and have deepened understanding of our sometimes shared, sometimes overlapping history.

In April, in Dublin’s Abbey Theatre, together with Senator George Mitchell and representatives from Britain and Northern Ireland, in a very moving event, we marked the 18th Anniversary of the Good Friday Agreement, that moment of democratic resolution of many of the issues thrown up a century ago.

In May, I represented the Government at a solemn and reflective ceremony in Grangegorman Cemetery where the British soldiers who lost their lives during the Rising were remembered.
In September, I had the honour of taking part in the ceremony to mark the death and celebrate the life of the extraordinary Thomas Kettle, who was of course a former Member of Parliament. The commemoration of his death was just one element of the extensive State Programme to mark the centenary of the Battle of the Somme which also saw President Higgins attend the Thiepval ceremony on 1st July and an official State Ceremony organised in conjunction with the Royal British Legion take place on 9th July in Islandbridge.

Of course it has been a memorable year for other reasons also. I know many of you would have shared our wish for a different outcome to the June referendum but we respect the democratically expressed view of the British people. I want to assure you that we will work to ensure the continued friendship and close ties between our two countries.

2016 provided us with an opportunity to look back a century and to remember the events of a hundred years ago, and the events since, that shaped the subsequent history of these islands. As we have looked back, we have also had the opportunity to see how much has changed during this century and to begin to reflect on the vision for Ireland and for the Irish, at home and abroad, in the next hundred years. Our diaspora are central to this vision and I look forward to engaging with you on this as we move from 2016 into 2017 and beyond.

While I know it may be considered a little early by some, Christmas and the end of the year are fast approaching and I do not want to miss this chance to thank you for all you have done in 2016 and to wish you a very happy Christmas and 2017.