The Embassy plays an important role in the strong partnership between the British and Irish Governments that supports reconciliation, recovery and prosperity for both countries. 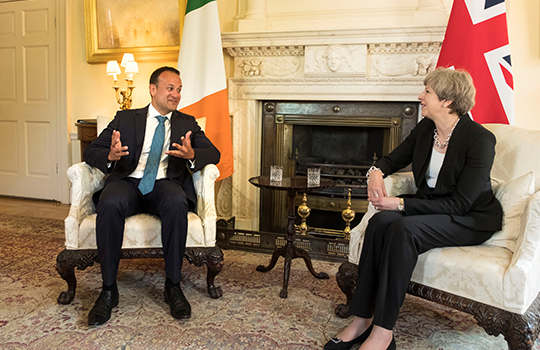 Britain is our closest neighbour and most important economic partner, in trade, investment and tourism. €1 billion of trade in goods and services flows across the Irish Sea every week.

The visit of Queen Elizabeth to Ireland in May 2011 was the first visit of a British Head of State to Ireland since independence. The State Visit of President Higgins to the UK in April 2014 marked another momentous milestone in our history. Since then, both Governments have been working closely to build on the success of the visits and to deepen our working relationship.

The joint statement issued by the Taoiseach and Prime Minister Cameron following a summit meeting in Downing Street in March 2012 sets out the key areas for British-Irish co-operation over the next decade.

The statement was significant because it was the first such statement not primarily concerned with the situation in Northern Ireland.

The British-Irish Council (BIC) was created under the Good Friday Agreement to promote positive and mutually beneficial relationships among the people of these islands and to provide a forum for consultation and co-operation.

The Council is made up of representatives of the Irish and British Governments, of the devolved institutions in Northern Ireland, Scotland and Wales, and of the Isle of Man, Guernsey and Jersey.

The standing secretariat to the British-Irish Council was established on 4 January 2012 and operates in Edinburgh. It is headed jointly by two officials, appointed by the Irish and British Governments.

The British-Irish Parliamentary Assembly (BIPA) was set up in February 1990 to act as a link between the Oireachtas and the Houses of Parliament at Westminster.

Originally called the British-Irish Inter-Parliamentary Body, it was made up of 25 Irish and 25 British parliamentarians from the Upper and Lower Houses of the Oireachtas and Westminster.

The BIIPB was renamed as the British-Irish Parliamentary Assembly during the 37th Plenary at Newcastle in October 2008.

BIPA's members meet in plenary session twice a year.  Between these sessions, the main work of the Assembly falls to four Committees, which deal with the following subjects:

Centenaries of a series of events which impacted on the foundation of the Irish State occur in the decade 1912-1922. The Embassy is involved in a number of key events during this period as part of the Government's commemorative programme commemorations of events that helped shape our political destinies. This series of commemorations offers us an opportunity to explore and reflect on key episodes of the past for Britain and Ireland and we are working with the British Government to do so in a spirit of historical accuracy, mutual respect, inclusiveness and reconciliation.

During the decade 2012 – 2022, we are witnessing the centenaries of a number of seminal events in modern Irish history including:

The Government is committed to commemorating these events in a peaceful and inclusive manner, based on principles of historical accuracy and in co-operation with key partners, at home and abroad.

Over the course of the decade, the Embassy will be organising many different events to mark these anniversaries, as part of the Government commemorative programme overseen by Minister for Arts, Heritage and the Gaeltacht, Heather Humphreys T.D.

The global Irish community will also have a vital role to play in commemorating our shared history. Our Embassies will host various events to mark the anniversaries.

The Embassy plays a role in the Irish Government’s work with the British Government, the Northern Ireland Executive and with civil society to foster reconciliation and develop opportunities for co-operation.

The Northern Ireland peace process brought about an end to decades of conflict. The Irish Government played a central role in this process and our work continues today.

Political division in Ireland, which has its origins in the various Plantations by English and Scottish settlers, and particularly the Plantation of Ulster, was consolidated geographically with the Anglo-Irish Treaty, which was signed in 1921. This divided the island of Ireland into two separate entities, with Northern Ireland remaining a part of the United Kingdom. From 1921 to 1972, Northern Ireland had its own devolved Government, separate from the Parliament in Westminster.

However, this Government was controlled by the Unionist majority in Northern Ireland and Nationalists suffered discrimination, both politically, through the gerrymandering of electoral districts, and also in the jobs market and the allocation of public housing. In 1969, heavy-handed policing of peaceful civil rights campaigners led to civil unrest and a revival of paramilitary organisations.

Following more than a decade of violence, in the early 1980s, the Irish and British Governments began working closer together to find a political settlement that would be acceptable to the whole community in Northern Ireland.

This resulted in the Anglo-Irish Agreement, which was signed by both Governments in November 1985. It allowed the Irish Government to put forward views and proposals on Northern Ireland affairs.

It also put in place structures to help the two Governments work towards finding a lasting solution to the conflict.

In 1993, the two Governments issued a Joint Declaration, which set out a charter for peace and reconciliation in Ireland.

It established the principles of self-determination and consent in relation to the Constitutional status of Northern Ireland. This meant that it was up to the people of Northern Ireland to decide on the future status and this could not be imposed from the outside. The Declaration also gave those associated with paramilitary violence a route into the political process.

The IRA and Loyalist paramilitaries announced a ceasefire in 1994. In December 1995, an international body was set up under the chairmanship of US Senator George Mitchell to independently assess the decommissioning of paramilitary arms. This body reported on progress in 1996.

However, in February 1996, the IRA ended its ceasefire and resumed violence.

Multi-party talks began in 1996, chaired by Senator Mitchell and involving the Irish and British Governments and all the parties elected in Northern Ireland. Sinn Fein was excluded until 1997, when the IRA announced a further ceasefire.

These talks resulted in the Good Friday Agreement in April 1998.

The Good Friday Agreement is the cornerstone of our commitment to peace and stability on this island. It was agreed on 10 April 1998 and overwhelmingly approved in 2 referendums in both parts of Ireland in May 1998. The Good Friday Agreement has been almost entirely implemented and most domestic matters are now dealt with by the Northern Ireland Assembly. Although there remain some challenges to stable and lasting peace in Northern Ireland, the institutions of the Agreement are now working to ensure a peaceful and stable future for the benefit of all the people on the island of Ireland.