The historical connections between Ireland and South Africa go back to the early settlements around the Cape. The bonds of friendship between our two nations were forged in the struggle against apartheid and later in the support South Africa provided for the Northern Ireland Peace Process. 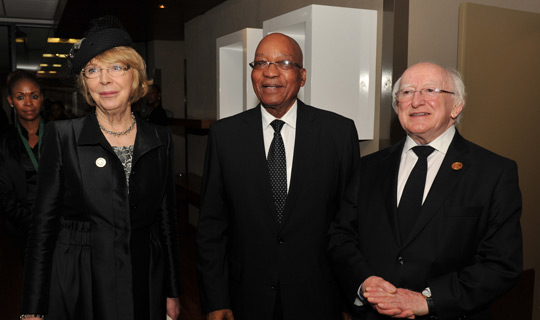 The first Irish settlers came to South Africa in the 18th century and integrated well into both the English- and Afrikaans-speaking settler communities. During the Anglo-Boer Wars Irish fighters were an important element of both the British military and Afrikaner nationalist forces. Most Irish settlers came to South Africa during the 19th century, either as part of the British military or in response to the booming extractive industries.

Between 1948 and 1994 South Africa was ruled by a white minority government which enforced a separation of the races according to the policy of ‘apartheid’. An international campaign of opposition to apartheid was formed, supported by the African National Congress (ANC) in South Africa. The campaign found much support in Ireland, and Professor Kader Asmal established the Irish Anti-Apartheid Movement. The Tánaiste Joan Burton, T.D. served as honorary secretary of the Movement in the 1980s. The most notable success for the Movement was the strike at Dunnes Stores by members of the Mandate Trade Union in 1984. The workers objected to the shops stocking produce sourced from South Africa and a lengthy lock-out ensued.

The process of dismantling the apartheid regime in South Africa began in the 1980s. F.W de Klerk was elected president in 1989 and greatly furthered the process of transition, entering into negotiations with the ANC leadership. President de Klerk announced the unbanning of the ANC as well as the release from prison of Nelson Mandela in February 1990. In 1994 the first free and democratic elections were held in South Africa and Nelson Mandela was elected the first black President of South Africa.

In 1988 the Lord Mayor of Dublin Ben Briscoe proposed that Nelson Mandela – then still imprisoned – be made a freeman of Dublin City. President Mandela visited Dublin not long after his release from prison, in July 1990, and received that honour. During his visit he also addressed the joint Houses of the Oireachtas. President Mandela returned to Ireland in 2000 where he was conferred with an honorary degree by Trinity College Dublin. President Mandela visited Ireland again in 2003 when he attended the opening ceremony for the Special Olympics World Games in Dublin. President Michael D. Higgins attended the memorial service for President Mandela in Johannesburg in December 2013. He was accompanied by the then Tánaiste and Minister for Foreign Affairs and Trade Eamonn Gilmore, T.D. as well as leaders of the Dunnes Stores strike action.

Professor Kader Asmal returned to South Africa in 1990 to continue his work with the ANC. In May 1994, Prof Asmal was elected to the National Assembly, and joined the cabinet as Minister of Water Affairs and Forestry. He later served as Minister for Education, before retiring from politics in 2008. Prof Asmal passed away in 2011. In 2013 the Kader Asmal Fellowship Programme was launched in Cape Town. The programme is funded by Irish Aid and will support 10 South African students to undertake post-graduate studies in Ireland each year.

Ireland is grateful for the support received from South Africa for the peace process in Northern Ireland. Figures such as Presidents Nelson Mandela and Thabo Mbeki and Archbishop Desmond Tutu leant their support to the British and Irish Governments in seeking to bring an end to the Troubles. South African Deputy President Cyril Ramaphosa was one of the international observers of parliamentary decommissioning, together with former Finnish President Martti Ahtisaari.

An Ireland-South Africa partnership agreement providing for political dialogue was signed in Dublin in 2004. The first partnership consultations took place in Pretoria in June 2006 and the second consultations in Dublin in April 2009. Consultations took place again in November 2012 in Cape Town. The Irish delegation was headed by the then Minister for Trade and Development Joe Costello, T.D. The South African delegation was headed by the then Deputy Minister in the Department of International Relations and Co-Operation Marius Fransman.

Irish Aid began providing bilateral aid to South Africa in 1994 following the advent of democracy. Ireland’s current programme in South Africa aims to reduce gender-based violence, and provide improved and integrated support at community level for those suffering from HIV and AIDS and TB. It also aims to improve capacity to enhance South Africa’s socio-economic growth and development. For more information about Irish Aid-supported projects in South Africa please visit the relevant section of this website. For more information about Irish Aid please visit their website.