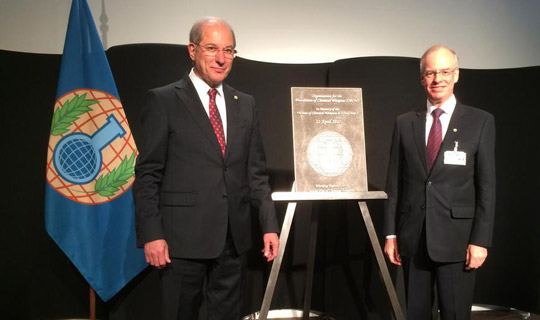 Ambassador Neary attended an event organised by the Organisation for the Prohibition of Chemical Weapons (OPCW) in Ieper, Belgium, on 21 April to commemorate the hundredth anniversary of the first large-scale use of chemical weapons during World War I and to honour the memory of all victims of chemical weapons.

At a special meeting of the OPCW in Ieper, the 190 States Parties to the Chemical Weapons Convention issued a declaration reaffirming their commitment against chemical weapons.

Addressing the gathering, the Director-General, Ahmet Üzümcü, said, “The Ieper Declaration serves to bolster what is now a longstanding global norm against chemical weapons.  It will guide our efforts as we hasten progress towards a world truly free of chemical weapons.”