On 30 November 2016, Ireland's Ambassador-designate HE Mr Kelly presented his credentials to His Majesty King-Willem-Alexander, thus formally becoming the Ambassador of Ireland to the Kingdom of The Netherlands. 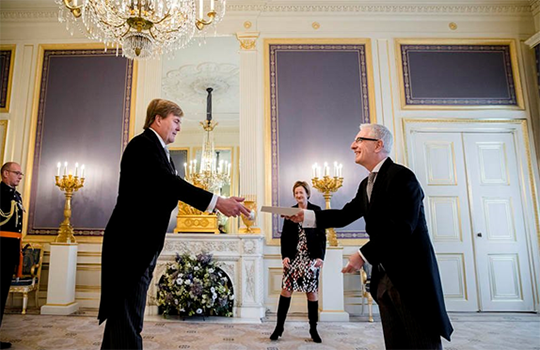 The presentation of credentials took place at the Noordeinde Palace in The Hague on 30 November 2016. In a formal ceremony in which the Ambassador was accompanied by his wife and Embassy diplomats, the Ambassador and the King discussed the excellent bilateral relations between Ireland and the Netherlands.

The ceremony was followed by a reception at the Embassy of Ireland in The Hague. Members of the Irish community, representatives of Ireland's State Agencies and representatives from the Dutch Ministry of Foreign Affairs were in attendance.