On 10 May 2016, the Embassy of Ireland hosted a special screening of the documentary 1916: The Irish Rebellion at the Filmhuis in The Hague. The event marked this year’s centenary commemorations and was opened by the Ambassador of Ireland to The Netherlands, H.E. Mr. John Neary.

1916: The Irish Rebellion is a landmark documentary which takes a fresh look at the events of the Easter Rising and, for the first time, places them in their proper historical, political and cultural context as the precursor to an independent Irish state. Narrated by Liam Neeson, this initiative of the Keough-Naughton Institute for Irish Studies at the University of Notre Dame tells the dramatic story of Easter Week 1916, when a small group of Irish rebels rose up against British rule in Ireland. Featuring rarely seen archival footage, new segments filmed on location and interviews with leading historical experts, the documentary also uncovers the untold story of the important role of Irish Americans in the lead-up to the rebellion. 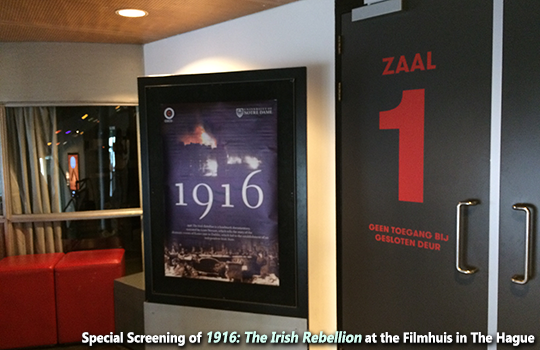