From 16 to the 24 November, the Embassy of Ireland, with representation from the Legal Division of the Department of Foreign Affairs and Trade, attended the 15th annual meeting of States Parties to the Rome Statute of the International Criminal Court. 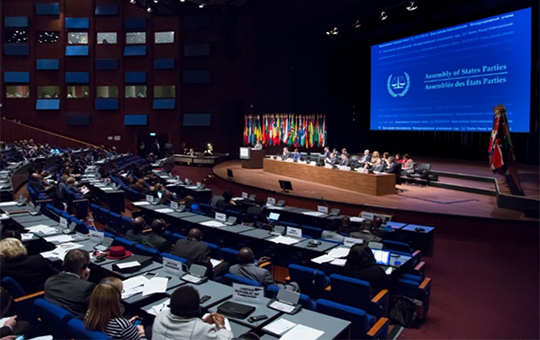 The 15th Assembly of States Parties to the International Criminal Court (ICC) took place in The Hague from the 16-24 November 2016. Ireland's delegation was headed by Ms Bridin O'Donoghue, Legal Counsellor, Department of Foreign Affairs and Trade, who delivered Ireland's national statement on Thursday 17 November. Ireland's national statement highlighted the key role of the ICC as a system of international justice that deals with the most serious crimes of concern to the international community. Reiterating Ireland's staunch support of the Court and its Trust Fund for Victims, the statement reinforced the role of the Court to ensure accountability and provide justice for the victims of these terrible crimes.

In addition to the delivery of national statements, the Assembly of States Parties agreed upon a budget for the court for 2017 and passed a resolution addressing key areas of work for the Court. These include: budget negotiations, cooperation, complementarity, amendments to the Rome Statute and efforts to promote universality of the Rome Statute. In addition to this, an open meeting was held to discuss the recent announcements by Burundi, The Gambia and South Africa to withdraw from the ICC.

The International Criminal Court is located in The Hague and currently has 124 member states. It was formed in 2002 following ratification of the Rome Statute by 60 countries. More information on the work of the ICC can be found at https://www.icc-cpi.int/