From 28 November to the 2 December 2016 the Embassy of Ireland, with representation from the Non-Proliferation and Disarmament Unit of the Department of Foreign Affairs and Trade attended the 21st Conference of the States Parties to the Convention on the Prohibition of the Development, Production, Stockpiling and Use of Chemical Weapons and on their Destruction. 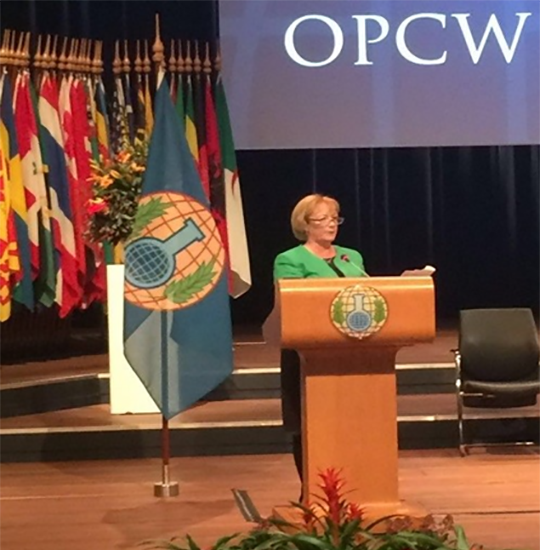 The 21st Conference of States Parties to the Chemical Weapons Convention took place in The Hague from 28 November - 2 December 2016. Ireland's national statement, delivered by Ms. Caroline Whelan, Chargé d'Affaires, Embassy of Ireland, reaffirmed Ireland's view that the use of chemical weapons by anyone, anywhere and under any circumstances must be rigorously condemned by the international community. Ireland also welcomed the adoption by the UN Security Council of a resolution to renew the mandate of the Joint Investigative Mechanism, which is carrying out vital investigative work into the use of chemical weapons in Syria.

The Organisation for the Prohibition of Chemical Weapons, based in The Hague, is the implementing body of the Chemical Weapons Convention (CWC). As of today, the OPCW has 192 Member States, who are working together to achieve a world free of chemical weapons. Ireland has been a State Party to the Convention since its entry into force in 1997. More information on the work of the OPCW can be found at https://www.opcw.org/