The Taoiseach, Enda Kenny, T.D., concluded a successful trade mission to The Netherlands and Germany from 6 to 8 January. The trade mission was focused on strengthening Ireland's economic recovery by increasing export markets, advancing trade opportunities and attracting investment to Ireland. 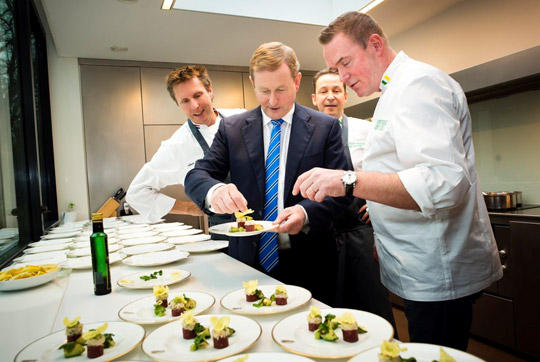 During his visit, the Taoiseach attended a Bord Bia event to promote exports to the Netherlands by Irish food companies. At the Irish Embassy residence, the Taoiseach met with Dutch Michelin starred chefs Alain Alders, Rogér Rassin and Erik van Loo, who play a role in promoting Irish beef in the country. The Taoiseach also toured the European Space Agency (ESA) where Enterprise Ireland signed an agreement with ESA to develop a Space Business Incubation Centre in Ireland. There are currently over 45 Irish companies working with ESA in the development of highly innovative technologies for the global market in space systems and space related services and applications. The Space Business Incubation Centre will have the objective of supporting 25 start-up companies in space-related technologies over the next five years. Following this, the Taoiseach addressed an Enterprise Ireland gathering on Ireland's economic recovery and the growing business opportunities for Irish and Dutch companies.

On the second day of his visit, the Taoiseach met with the senior executives of a global food corporation with operations in Ireland and toured a major pharmaceutical construction project outside Amsterdam which involves a number of leading Irish engineering and construction firms.

Over the course of the trade mission, 17 contracts were signed by Irish companies in the Netherlands and Germany valued at approximately €57m.