On 16 January 2017, Ambassador Kelly paid a courtesy call to the Prosecutor of the International Criminal Court, Fatou Bensouda. 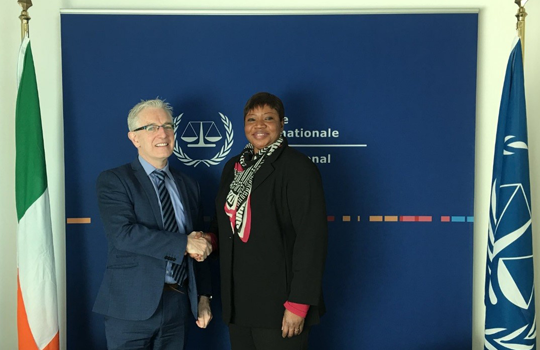 On 16 January 2017, Ambassador of Ireland to the Kingdom of the Netherlands, H.E. Mr Kevin Kelly paid a courtesy call to the Prosecutor of the International Criminal Court, Fatou Bensouda at the headquarters of the ICC in The Hague.

Ambassador Kelly and the Prosecutor spoke about Ireland’s staunch support of the Court, the statement made by Ireland at the 15th Assembly of States Parties to the ICC in November 2016, and Ireland’s long-standing support of the ICC Trust Fund for Victims, which provides assistance to the victims of crimes against humanity and war crimes under the jurisdiction of the ICC.

Ireland, as a firm supporter of a strong and independent International Criminal Court, is committed to the fight against impunity and recognises the need to provide assistance to the people who have suffered harm as a result of crimes under the jurisdiction of the ICC.